EQMD censors vocal transgender advocate columnist Dana LaRocca who along with TransMaryLand is lobbying legislators to amend HB235 to include public accommodations provisions.

!!!Update: In=Equality Maryland is now deleting my from there facebook wall as well. Captures of thread before and after at the bottom of the post.

Equality Maryland has also been deleting comments by other Transgender Marylanders who are opposed to HB235 as written. In doing so Equality Maryland is misrepresenting the wishes of trans people to make appear we approve of the 'equality' bill without the all important public accommodations provisions.

What brought about EQMD's silencing of it's most critical transgender ally? What is Equality Maryland's investment in a transgender equality bill without the volatile bathroom provisions? 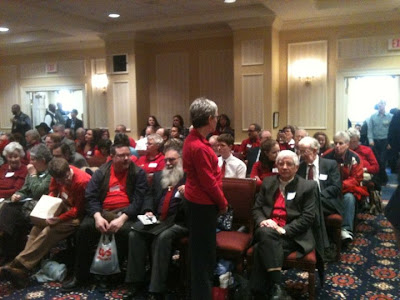 explains in a Facebook message what brought about this draconian messure;

"As I said other dissenters opinions have been deleted, I don’t know if they have been blocked though. I think I have been polite. I sometimes use colorful language but I don’t curse or call people names or any of that childish nonsense. I think about a week ago I asked if anyone knew when certain legislators planned to propose a pissing license to avoid having to inspect genitals at the door." 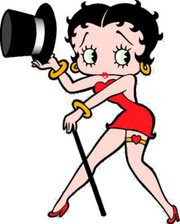 "What upset them yesterday was the fact that I called them out on their lack of diversity. I don’t know my exact words but I have the responses from others to give you an idea of the discussion."

"Next I posted jokingly that I was wearing my little red dress but that I was afraid of getting tossed out of the ladies room in Annapolis because my attire was illegal. Note; my (facebook) avatar is Betty Boop in a red dress."

Danna was alluding to the 2009 incident when a transman was thrown out of the gay establishment the Hippo Bar despite Baltimore having transgender inclusive ordinances.


Why was Dana LaRocca's comments deleted? Why was she blocked from commenting on EQMD facebook? Why were so many people's comments disagreeing with EQMD agenda and methods deleted?

Many people myself included believe HB235 was striped of the public accommodations and served up as a sacrifice to transphobes so EQMD can get a marriage equality bill passed. Now that we bloggers have let the cat out of the bag we will be a lot harder to silence.

Edited 02/11/09 with my apologies for shoddy journalism to all offended. 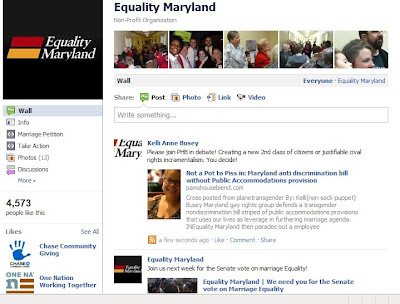 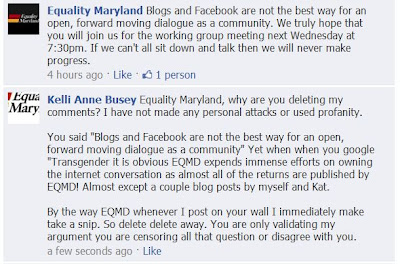 lets see if they leave this one up?
Posted by planet trans at 10:28 AM

I had to delete the original post because although I had amended the title it was still showing up incorrectly when pasted.

I didn't want to loss the comments though. Its very rare that I get read by people of that caliber let alone have comments made by them so I copied there comments and pasted them onto this post.

JennaFischetti said...
I cannot speak to the deleted comments or blocking an individual from posting comments. I myself have had to turn off comments on my personal profile.

However, I was criticized by an EQMD representative, or at least n individual who described himself as a representative of EQMD through this statement

"On the 16th at 7:30 at a location that I believe has not yet been decided we are having a legislative work group specifically to discuss the future fight for broader and inclusive gender identity protections. We, meaning EQMD,"

I was criticized for (2) sentences made in a multiple paragraph reply at TransGiot a few days before, questioning the candor and position of EQMD's, Field Organizer for Gender Identity Issues, Owen Smith.


Owen by his own admission described himself as gender queer and by the bio at EQMD's own website was listed as qualified for the position based partially on being a founding member of Baltimore Team Trans. Their description from their Facebook page is as follows
"Baltimore Team Trans formed in response to an incident on January 30, 2009 in which a trans man was forcibly removed from the men's bathroom in a Baltimore gay bar. Team Trans is dedicated to overturning transphobic and gender-segregated spaces in the "gay community" and the rest of society, ONE BATHROOM AT A TIME."

Owen has since been offered up to the National media as a transman in support of HB235 WITHOUT public accommodations. In this media blitz,Owen stated last years bill, HB 1022 included offensive and destructive language without describing what that language was.

I called into question his reversal and lack of candor coming from somebody being purported at a representative of the Maryland transgender community.

Additionally, last September a tragic number of cases of bullying on members of the LGBT community made National headlines. Regrettably, the bullying appears to be internal now. Let's stop eating our own....

February 10, 2011 1:35 PM
translegalhistorian said...
Wow - the ever-so-brave "Lurleen Blogovitch" ( http://endablog.wordpress.com/2011/01/01/this-post-doesnt-exist/ ) has inserted herself into that thread, and is ever so convenient that her responses (which come perilously close to teh dissemination of legal advice) are visible, yet Dana's are not.

Call it the "Kathleen Erasure Effect."

February 10, 2011 3:17 PM
translegalhistorian said...
@Jenna: That seems to be par for the course with the now-former Free State Just Us.

In 2000, at the National Lesbian Gay Law Association Conference in D.C., Liz Seaton (who by that point was with HRC but who a year earler had been with Free State Just Us and, in that capacity, is credited with personally giving the Maryland Legislature 'the community's' approval for a non-trans-inclusive bill) stood up at a trans law panel and claimed to be trans.

To the best of my - and everyone else's that I know who has any familiarity with the subject - she is a she, always has been a she, uses women's restrooms and has never made any attempt to live or find work or as a man.

February 11, 2011 7:42 AM
translegalhistorian said...
You'll be happy to know that the 'Equality' Maryland Facebook page is not the only media stream that has been infected with Erase-ovitch syndrome.

This morning I posted a comment on the MD HB 325 thread ( http://www.pamshouseblend.com/diary/18634/valentines-day-in-maryland-is-about-more-than-dinner-and-roses-this-year ) at Pam's House Blend - a thread started by 'Lurleen' - and, at some point during the day, that comment was erased. Of course, my comment did not buy into the official party line about the utility of the Maryland bill.

The commonality between what happened to Dana on Facebook and what happened to my comment at PHB (and any replies that were underneath; I don't know if there were any) is 'Lurleen Blogovitch', sockpuppet extraordinaire.

Later, over at ENDABlog I'll be posting a PDF of the PHB post as it appeared with my comment on it, but I have some errands to run.

Gay-primacy skullduggery is afoot, folks! In Maryland for trans people, 2011

translegalhistorian said...
@Jenna: That seems to be par for the course with the now-former Free State Just Us.

In 2000, at the National Lesbian Gay Law Association Conference in D.C., Liz Seaton (who by that point was with HRC but who a year earler had been with Free State Just Us and, in that capacity, is credited with personally giving the Maryland Legislature 'the community's' approval for a non-trans-inclusive bill) stood up at a trans law panel and claimed to be trans.

To the best of my - and everyone else's that I know who has any familiarity with the subject - she is a she, always has been a she, uses women's restrooms and has never made any attempt to live or find work or as a man.