Dallas Protest of Rick Perry's Prayer Event. ALL are Welcome! 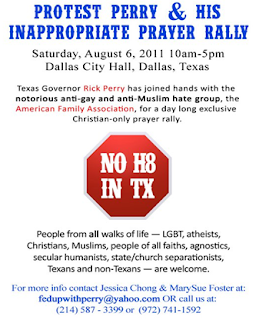 
Dallas, Texas, August 6, 2011 — This is a peaceful demonstration in front of Dallas City Hall, from 10:00am - 5:00pm, to protest "The Response: A Call to Prayer for a Nation in Crisis," an event initiated, endorsed, and promoted by Texas Governor Rick Perry and the American Family Association.

For those who are not yet aware of the AFA's attitude on gays, please experience this:

Anyone who values the separation of Church and State is welcome to join-- non-theists, non-Christians, Christians. Please be aware that we are NOT trying to convert or mock anybody's religion. We are also not trying to prevent the prayer event from happening. If it doesn't happen, we will have no picket. This is about a picket, not an effort to stop an event from happening.

1. The event itself is being promoted by Gov. Perry in his official capacity as an elected official.

2. Gov. Perry has repeatedly and proudly violated church/state separation on several issues, all throughout his time as our governor.

3. The prayer event is being endorsed by the American Family Association, which is considered to be a hate group. Lately, the AFA has thrown out so much hate speech against gays, Muslims and state/church separationists.

4. I don't believe that any of the other 49 states' governors, whom Perry invited to his rally, are as devoted to flaunting their disregard for the diversity in their respective states' populations. This is while our state budget is in a mess, public education is underfunded, and our most popular politicians are riding on a wave of popularity, such that they can easily avoid any responsibility for explaining themselves and their actions to the public.

For more information about this demonstration, please contact Jessica Chong (817) 495–3993 or