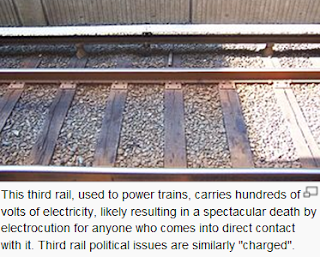 The Third rail of Hate.

As noted by the Times Record News of Wichita Falls Texas Governor Rick Perry political gamble that others would embrace hate disguised as Christianity has failed.

No one disputed Mr. Perry's right to pray, it is the company that he chooses to keep that offends. At least that's the sentiment of most Americans and the overwhelming majority of politicians.

The "response' event has only confirmed 10% of the seating available at Reliant Stadium.

Only Kansas Governor Brownback and Bobby Jindal of Louisiana of the 49 governors invited have agreed to ride with Perry on this Third Rail. This is in despite of Perry's invitation and political muscle having been the Chairman of the Republican Governors Association in 2009.

Even Perry has downplayed and backpedaled his involvement a fact not unnoticed by the AFA. Obviously becoming aware of the political suicide by association with the AFA Perry has distanced himself saying he may not speak and may only usher at the event. How humble. How ridiculous! Christs love is not political expediency or populism. 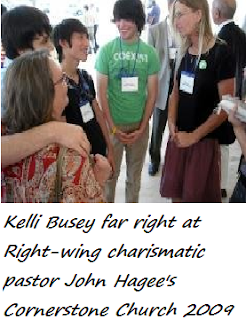 There are many third rails, and the lord knows as a Christian transgender woman I am a rider on many, I pray I will never buy a ticket on the rail to hate.

Years ago I joined with Soulforce to visit one of the "response" pastors John Hagee, trying to bring Christs message of radicaly inclusive love to his Cornerstone Church.

Even though we have made a substantial impact its not time for Texans to rest on our laurels. We must take to the streets in Houston on the 6th. Lets make sure other would be political hate mongers know where riding that third rail will take them.
Posted by planet trans at 8:02 AM