Chilean Transgender Houses Burnt to the Ground Demand a Investigation! 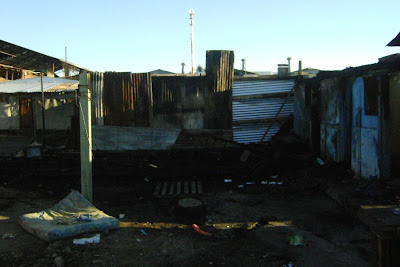 Four separate houses temporally being used after a earthquake destroyed the permanent structures were burnt to the ground on September 19, 2011. The investigating official declared it a accident caused by a space heater even though he never visited the site.

Ironically, or perhaps intentionally the fire occur ed as the occupants were celebrating independence day.

Source: Front Line Defenders.org "Ms Soraya Sánchez, President of Transgéneras por el Cambio, (Transgender for Change) and Mr Andrés Rivera Duarte of the Organización por la Dignidad de la Diversidad – OTD (Organisation for Dignity of Diversity), have publicly denounced the fires as a hate crime, specifically targeting the transgender community and organisations working to promote and protect the rights of that community. As a result of their public statements both Transgéneras por el Cambio and the OTD fear that there could be further attacks carried out against them or their members."