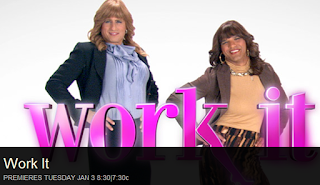 'Work It' makes a mockery of transgender peoples struggles in the work place and empowers those with dormant transphobia to act on those urges with violence.
It reinforces the biased stereotypical misogynistic social constructs that transsexuals are not "real" people and therefore of no worth.

Plot Summary: "Looking for a job in today's economy can be a real drag. Take Lee Standish (Ben Koldyke), one-time breadwinner and current unemployment statistic. After being laid off, Lee will do anything it takes to support his family – even if it means (allowing himself to be so degraded as to) putting on a skirt and heels." The GLBTQ Encyclopedia defines

" continuing treatment of transvestism as comedy--including what can be called the "transvestite plot," wherein a heterosexual character must temporarily cross-dress in accordance with a narrative contrivance, only to be happily unmasked at the conclusion--may be seen today as, by turns, quaint or coy, playful or conservative, potentially subversive or ultimately transphobic. Corrective strike by me.


Our lives are a struggle. When we have what others consider less desirable jobs we are allowed to

I'll never forget one haters sentiments when he said "I don't care if a tranny is working as a cashier if his line is moving faster I'll get in it". But let us get a more desirable job as I have, and the real hate begins. Everyday, viciously and without mercy. Its not comedy, it's tragic.

Any transgender person who has sat and waited in a doctors office will confirm the sales end of the pharmaceutical companies is sexualized to a almost comical extent. The woman who enter the doctors offices peddling there wares are almost always forced into hyper feminized costumes making this programs concept offensive and marginalizing to cisgender woman as well.

Transgender people have until recently have been forced to buy hormones instead of proper medical care on the internet. At best we were treated by the good graces of a empathizing doctor. We often feel compelled to remain silent even when office staffs were abusive because the reality is there might be only a couple doctors with hundreds of miles willing to treat us. 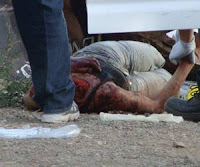 Insulting is the core message of 'Work It'. It that takes a 'real macho man' to teach transsexuals how to be a woman. This is the same meme that excuses rapists in South Africa when they 'cure' lesbians.

In a recent survey of transgender New Yorkers the

Clearly, our decapitated bodies bodies are no more a laughing matter than the lynching of black people.

The President of ABC could give a fuck less if his shows contribute to our murders as long as they make him laugh. Digital Spy reports that ABC president Paul Lee: 'I make no excuses for Work It'
To this man the chaotic dysfunctional Monty Python serves as a role model for cultivating social consciousness! Is he even fit to serve as president of ABC?

UNREPENTANT MURDERER Our blood will be on your hands Paul Lee. Do not air this travesty.
Posted by planet trans at 9:00 AM

Well said! One question: the show is set to air on ABC. Is it being produced by CBS Television for ABC?

The show is set to air on ABC.

My apologies to CBS for the typo! Lifeafterdawn and Michi-chan thank you for correcting me!