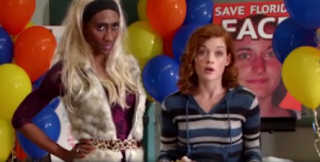 Episode Synopsis: Irritated by all the cafeteria waste at school, Tessa motivates the student body to get involved with giving back. Unfortunately their charity of choice involves helping residents of Florida improve their complexions. When Tessa introduces a homeless transsexual to the student body as part of a lesson, they decide that Tessa is really the person in need. Meanwhile George receives a large dental bill from Noah, which puts a strain on their relationship, on “Suburgatory,” WEDNESDAY, NOVEMBER 2 (8:30-9:00 p.m., ET) on the ABC Television Network.

The main character introduses the charity case "This is Gladys a man who lives on my street" introducing a transsexual woman. "One of her class mates asks "A Man?" Gladys says "Let me take it from here, I tuck it in."
This is the systemic misrepresentation of transgender people ABC is showing the world. After watching this clip please join with the thousands who have signed the petition asking ABC not to show another one of its transexpolitive shows "Work It"
Posted by planet trans at 9:50 AM

Email ThisBlogThis!Share to TwitterShare to FacebookShare to Pinterest
Labels: ABC Work It, Suburgatory, Transphobia in Media

I saw this episode, it was sad they had to go that route - the script could have been a great teachable moment in compassion and still humorous without being transphobic.