Do you recognize the suspects in pipe beating of SF transgender Woman? 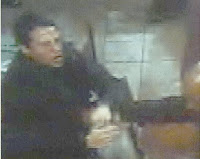 Source examiner.comThe San Francisco Police Department released images and information Friday in an effort to identify two suspects in a Jan. 31, 2010 attack that authorities are describing as a hate-crime assault on a transgender female and a male friend.

Images of suspects released by the San Francisco Police Department 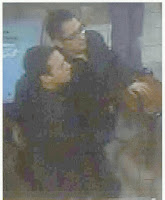 A press release by the SFPD reports that on Jan. 31, 2010, and about 2 a.m., a transgender female and her male companion went to eat at a restaurant on the 3000 block of 16th Street in San Francisco.

Two suspects started to harass the transgender female and one of the suspects took a swing at her. The male friend of the victim then defended her and the fight was broken up by the restaurant owner.

When the victims stepped outside the restaurant at about 2:35 a.m. and tried to hail a taxi cab, the suspects from the earlier fight ran up behind the victims and yelled "remember me now?!" and then started beating them both with a chrome pipe, causing both victims to lose consciousness. The suspects fled on foot westbound on 16th Street to Northbound on Guerrero Street.

Both victims were transported to the ER.

The SFPD is asking for the public's assistance in the investigation by identifying the suspects in the photos and contacting the police.

The first suspect is described by investigators as a Latino male, 5'6" tall at 150 lbs., black hair, tar marks on his lower teeth. He was last seen wearing a black button-up dress shirt and black pants.