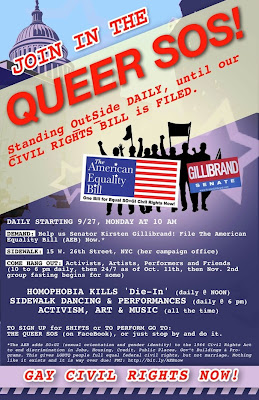 Today, Monday, Sept. 27, 2010, NYC activists will commence a daily vigil Standing OutSide of Senator Gillibrand’s campaign office at 15 W. 26th Street, from 10 a.m to 6 p.m. to urge the Senator to take action for LGBTQ inclusion in the 1964 Civil Rights Act.

The demand is that Gillibrand file a bill to start this process called The American Equality Bill (AEB) which would add “sexual orientation & gender identity” (SO+GI) to all U.S. nondiscrimination laws, consistent with her campaign platform announced last October, 2009 (http://bit.ly/GillibrandCRAoct09).

The AEB was created by veteran activists Karen Doering, Esq. and Juan Ahonen-Jover, Ph.D., and is supported by www.equalitygiving.org and www.actonprinciples.org, as well as grassroots activists around the country.

“We need a bill worthy of our dignity to organize around and we will wait no longer,” said Iana DiBona a lead SOS! organizer. “It’s been 46 years since the ’64 CRA passed, how long must we wait to start the process?”

Activists maintain that it is long-past time that our community demand equal inclusion in the 1964 laws that protect everyone else in American from discrimination.

It was after all, Bayard Rustin, a black gay hero who helped lead the black civil rights movement and created the March on Washington where MLK gave his Dream Speech, almost 50 years ago.

“In ’64, we were shoved aside and Mr. Rustin’s civil rights and ‘sexual orientation’ were excluded from America’s non-discrimination laws,” said Todd (Tif) Fernandez, the Campaign Facilitator for The AEB Project (on FB at http://bit.ly/AEBnow). “Our time has come, our dignity demands it.”

The action – called THE QUEER SOS! – will involve sentries Standing OutSide Gillibrand’s office every day, all day (10 a.m. to 6 p.m.) until the bill is filed. If no action is taken, on October 11th – National Coming Out Day – the vigil will go around the clock (24/7), and, as of Nov. 2nd, some members will begin a water-only fast to demonstrate the urgency.

Each day at noon there will be a “Homophobia Kills Die-In” to bring attention to the fact that LGBTQ people commit suicide or are killed regularly due to this country’s on-going sanction of homophobia.

“Homophobia kills,” said Alan Bounville, a founding member of Queer Rising NYC, “and each day that Congress fails to include us in the Civil Rights Act they are complicit with more of these deaths.”

The Queer SOS! daily vigil and community commune will feature art, music performances and friendship, amidst steady activism. See the schedule at www.queersos.com, or just come by.

PERFOMERS and ACTIVISTS can sign up for sentry duty, or to perform by emailing queersos@gmail.com, or at www.queersos.com – or just show up – 15 W. 26th Street/Broadway.

NOTE: The AEB Project is all grassroots, all volunteer. The AEB adds SO+GI (sexual orientation and gender identity) to the 1964 Civil Rights Act and the Equal Credit Opportunity Act, giving full and equal federal non-discrimination/civil rights protections to over 30 million LGBTQ Americans in every state with one bill – covering housing, employment, credit, public places, gov’t buildings (including schools), and all federally funded programs (like HIV and health programs, homeless youth, adoption, etc.) (see bill and FAQ at: www.queersos.com).
Posted by planet trans at 12:40 PM

Email ThisBlogThis!Share to TwitterShare to FacebookShare to Pinterest
Labels: SOS