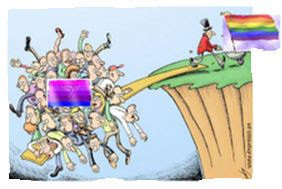 HR235 has just been voted out of the subcommitte Friday the 25th March 2011. It needs to crossover into the Senate by March 28 (no sessions this weekend which mean a vote on Monday the 28th.) Then go to the Judicial Proceedings Committee for a vote and to the floor of the Senate for a floor vote by the April 11th.

It is also reported that there are some amendments to the bill not yet annotated on the bills official page. It is presumed these changes are going to be added to appease legislators not yet committed and not the Maryland transgender community represented by Transmaryland and Trans-United or local journalists who have voiced loud objections to the removal of public accommodations provisions

Dana LaRocca, a Maryland transgender woman sums it up nicely;

"HB235’s omission of public accommodations is a flaw that will not easily be remedied in the future. All previous anti discrimination bills have included public accommodations protections and that omission in this bill will in the future be seen as a legislative intent to create a second class of citizenship for transgender Marylanders. I understand that it is considered an easier bill to win in its current form. The transgender community is not interested in an easy win. We are interested in justice. By denying equal access to public accommodations HB235 denies the dignity of an entire class of persons."

"Out of respect for the dignity of human persons HB235 must be rejected and we must not consider such legislation until such time that it includes the same protections for transgender persons as the law does for all other classes of citizens. We are all entitled to the same goods inherent in social practice. That is what social justice means." 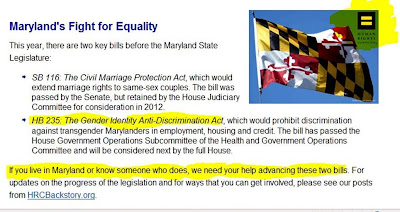 freedom please do not pass HB235.


This is so very wrong.
Posted by planet trans at 7:33 PM

"It is also reported that there are some amendments to the bill...."

And yet, if there were anti-gay mystery amendments to the gay marriage bill lurking the night before a critical vote, 'Equality' Maryland would be sounding the alarm.

I can only presume who/what is actually behind the mystery amendments to thr 'trans' bill.

With heart atwitter I await word of what those amendments will be.

No problem. Here's my understanding of the changes:

New definition: (E) "GENDER IDENTITY" MEANS A GENDER–RELATED IDENTITY or APPEARANCE OF AN INDIVIDUAL REGARDLESS OF THE INDIVIDUAL’S ASSIGNED SEX AT BIRTH.

So, behavior and expression are deleted - at least that's my understanding as of now. I'm not sure the deletion of behavior has any ill effect, as I don't know what a "gender-related behavior" means. Expression is probably a worse deletion, but I think people may feel that's covered by both identity and appearance.

BTW, I think this is a terrible definition from a legislative drafting perspective (gender identity means a gender-related identity??)

The fiscal note (http://mlis.state.md.us/2011rs/fnotes/bil_0005/hb0235.pdf) has a discussion of prior introductions. I haven't looked to see how the current definition of gender identity varies from prior years, but you might find that helpful.