More than 100 prominent cultural figures have addressed a letter to the Supreme Court and Moscow City Court calling for the release of the three jailed Pussy Riot rockers. 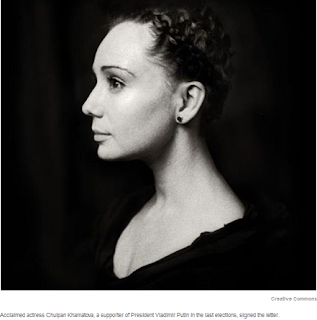 Among the signatories were figures who openly supported President Vladimir Putin in the last election, including Chulpan Khamatova, a popular actress and co-founder of the Gift of Life charity, and actor and theater director Yevgeny Mironov.

A copy of the letter was published Wednesday in Moskovsky Komsomolets.

In all, the list of Pussy Riot supporters includes 103 musicians, actors, filmmakers, singers and other cultural figures.

"We do not believe that the actions of Pussy Riot constitute a criminal offense," the letter said. "The girls did not kill anyone, they did not rob, did not commit violence, did not destroy or steal anyone's property."

The letter asks for the women, two of whom are young mothers, to be freed from custody.

"We see no legal basis or practical reason for the further isolation of these young women, who do not pose any real danger from society," the letter said.

Ekho Moskvy has a list of the 103 signatories gathered so far, and they are looking to add names to the list.

Three members of the Pussy Riot punk group have been in detention since shortly after an impromptu February performance at the Christ the Savior Cathedral that incensed church and state officials. Their detention was extended last week until at least July 24 while they await trial. They face up to seven years in prison.

The above is cross posted in full from The Moscow Times


I posted the letter in Russian and the English translation provided by PussyRiot.org

Appeal of actors and artists of the Russian Federation