Jesus Appeared to thousands of Muscovite's as a Pussy Riot member on signs across the city. 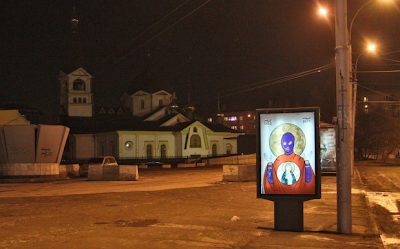 I ask why not? Jesus while she was in human form did her very best to overthrow and subvert the patriarchal of her time, why shouldn't she continue that today?

The current religious demagogue in Russia who title is ironically "patriarch", demanded a offical investigation into the matter and as it turns out a artist actually posted those pictures.

They fined the artist 30 bucks for desecrating the bus stops.

Mean while Pussy Riot sits in jail awaiting Russian "Justice" for praying that There country be freed of the tyrannically oppressive Vladimir Putin before he starts world war three.

There will be a benifit concert in Brokyln NY on June 23 to support Pussy Riot. Its expecialy inportant now that they have been denied bail and must remain indefentaly in jail awaiting trial.
Posted by planet trans at 8:43 AM

Jesus is a punk rocker

Am sharing this story around.

[FYI, I think the icon shows the BVM as a Rioting Pussy, w/ Jesus in the center. The icon (apart from the Pussy Riot innovation) is known as "The Blessed Virgin of the Sign" (it's nickname is sometimes called "Porthole Mary"! ;-p)]