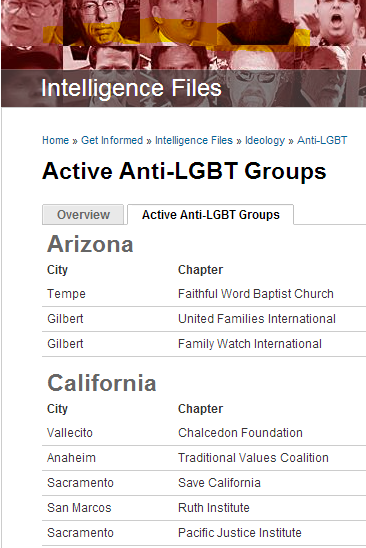 The lawyer group that failed to undo California marriage equality and transgender student fairness laws, costing taxpayers millions defending their citizens have earned a just(ice) reward for their efforts.

The petition drive to force a public vote on transgender student's rights as unconscionable is it was, wasn't what earned them the lowest of designations.

Although the PJI was largely responsible for soliciting money to fund the professional signature gathers, that wasn't the reason for their new moniker. Nether was it unto it self the fear mongering by the signature gathers who prodded Californians into unwittingly endorse the petition.

PJI's tactics as despicable as they were, probably wouldn't have spurred the SPLC to action, it was what the PJI did outside of California that rendered them a hate group.

The PJI unable to find a single instance where a transgender student violated personal space inside the state found a vulnerable transgender student in Colorado to target. Armed with fictional 'proof' the PJI unmercifully hounded the girl until she was near suicide.

The PJI discredited by Cristan William's fact checking didn't admit lying instead proceeded to use a wider bigot's brush and continued to attack this child.

Cristan Williams has documented her magnificent part in #JD4PJI: The downfall of the Pacific Justice Institute and the sweet victory of trans youth at the TransAdvocate.

That's why the PJI is rightfully denoted as an active hate group by the Southern Poverty Law Center.

This grass roots defense of California transgender students by the trans community and our allies is a major victory. We didn't ask for this fight, but let it be known, if you want to do battle, we are ready.

Now we need to get Cathy Brennan designated right alongside them.