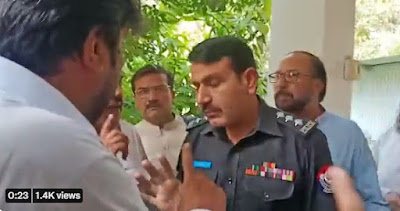 Ihsan Shah, deputy superintendent of police, was suspended for a raid on a transgender press conference held at Peshawar Press Club on Oct. 12.
The press club in Peshawar is the one place that transgender people in the conservative north state can report to media, and to the rest of the world, about the egregious conditions that they are forced to live in.
UCA News Reports that Farzana and her transgender sisters were holding a press conference when police raided the main hall of Peshawar Press Club. Ihsan Shah, deputy superintendent of police, and his guard were stopped by the cabinet members of the club. “Stop this event. You don’t know me. I will see you,” he threatened the resisting journalists.
The club governing body later boycotted all police ceremonies in Khyber Pakhtunkhwa (KP), the most conservative province in Pakistan. Covering their faces in dupattas (long scarfs) and masks, Transgender Alliance KP later protested outside the press club on Oct. 12. More than 50 journalists demanded the resignation of Shah in a demonstration the next day.

Shah has been suspended but Transgender Alliance KP members continue to receive death threats. According to Farzana, the provincial president of the alliance, 80 transgender people have been murdered in the northern province since 2015. "Eunuchs were holding a press conference at the press club. Police raided the press club and said that they had come because the eunuchs were holding a press conference here"

Father Nasir William, director of the commission for social communications in Islamabad-Rawalpindi Diocese, condemned the police raid on the press club.

“This is the first time a police team has raided the press club, desecrated its sanctity and held the organizers of press conference hostage. We condemn this attitude and demand our freedom of speech and to protest. Transgenders openly perform at functions organized in Punjab province but remain hidden in Peshawar,” said the priest who has served in Peshawar for more than three years.
Posted by planet trans at 7:51 PM