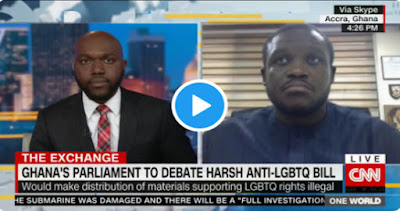 Ghana’s parliament is set to debate a bill that -- if passed -- would introduce one of the harshest anti-LGBTQ laws on the African continent.
Sam Georgegh, the MP who introduced "The Promotion of Proper Human Sexual Rights and Ghanaian Family Values Bill" at the behest of US evangelists could not defend this bill criminalizing LGBT people. Instead, he spent time gaslighting the United States, in an interview terminated with him questioning transgender Ghanaians humanity.
Reuters: UN Human Rights Experts- Ghana's anti-gay bill condemned as 'state-sponsored' violence
In 2019 a conference was hosted in Accra, Ghana by the World Congress of Families, which the Southern Poverty Law Center (SPLC) has identified as an international hate group, and HRC calls "one of the most influential American organizations involved in the export of hate."
One of the highlights of the conference, for attendees, was the presence of US ultra-conservative organizer Brian Brown, the president of the World Congress of Families (WCF).
This is where the current push to criminalize LGBTQI people took shape. If the title of the Ghanaian bill sounds familiar, it should. The same wording has appeared in over 50 anti-LGBTQI bills in the US this year.

Ghana’s parliament is set to debate a bill that -- if passed -- would introduce one of the harshest anti-LGBTQ laws on the African continent.

Giving bigotry a platform in the name of dialogue or let's hear both sides, does more harm than any good.

My love to the LGBTQI community in Ghana. You deserve protection and care. Instead of your oppressors being amplified on international news platform https://t.co/l50amDj6W4