Trans teen Jane Doe's 33rd day in solitary despite the Govenors call for her transfer. Why? 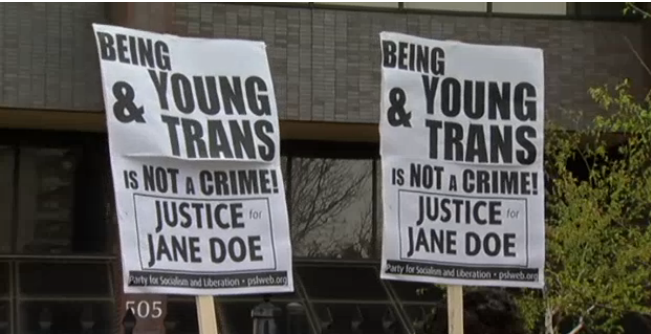 "I can’t take another month of this." Jane Doe tells Governor Malloy. She's talking about her confinement to solitary which amounts to nothing more that torture.

The below is the letter Jane sent to Malloy via Cool Justice:

"I am writing you to let you know that today is my anniversary. I have been sitting in this prison for a month now and there is no plan to get me out. I am suffering in here. I’m having trouble sleeping and I’m not eating much. I cry in bed every night. I can’t be myself in this place. I feel forgotten and thrown away. As you probably know, these feeling are not new for me. This is the way my life has been going since I was a little kid. My lawyer says that Commissioner Katz is the only one who can fix this but when I wrote her a letter it didn’t help. She has given up on me. If you’re her boss you can do something, right? Everyone says I need to be somewhere where I can get help and Katz keeps telling everyone that she is working to get me out of here but I don’t believe her. I think this is just another one of her stories that isn’t true. I want to call her a liar but people tell me that I shouldn’t say that about someone important like her. All I know is that she has said a lot of things about me that aren’t true. She was on TV telling people I blinded someone and broke their jaw. That was a lie. She said that she never asked that I go to Manson. That was a lie. She told everyone that I should be going to that new girls program at Riverview. That was a lie. Now she is telling people she is trying to get me out of here but nothing is happening. I hear people talking and they are saying that I am going to be here till I’m 18. I am done with DCF. They just want to make up stuff about me so that everyone thinks I am some kind of wild animal. Is it Ok for them to do this? To just lie about me and throw me in prison and forget about me? If I was in charge I wouldn’t let this happen. If you’re the Governor then you are in charge of everyone who works for the state. DCF is supposed to be helping me, right? If this is helping me then I’m all set with being helped. I would be a lot better off being on my own. It seems like you’re my last chance to get out of here. Don’t forget about me. I can’t take another month of this."

Governor Malloy told Katz to get her moved...

Malloy spokesman Andrew Doba said in an emailed statement, “the Governor has spoken with (Department of Children and Families) Commissioner (Joette) Katz, and the Commissioner agrees that Jane Doe must be moved to another setting as quickly as possible.

But Jane Doe's attorney hasn't seen anything hopeful yet saying...

“I think the DCF is playing a game, they’re stalling for time to keep her in there, they are refusing to negotiate,” Bloomfield attorney Aaron Romano said Friday. “They are not sitting down at the table with Jane Doe’s lawyers. The only person who can make anything happen at this point is Governor Malloy. My phone line is open.”