All Out.ORG: Ukraine Parliament Going on Vacation Before "Gay Propaganda" Vote Is Not A Victory 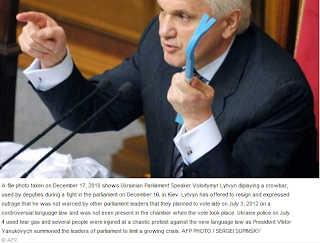 This is good, but it wasn't a victory, just serendipity.

I received a email from All Out.org thanking me for signing the petition and essentially claiming the lions share of the credit for the Anti LGBT Russian style "Gay Propaganda" bill not being made into law, for now anyways. Then they asked for money, over and over.

"Thank you. Law 8711, Ukraine's proposed gay-gag rule, has been shelved for now. Because of the efforts of All Out members around the world who signed, called, tweeted, shared and stood with local Ukrainian activists, a bill that would have silenced millions has been stalled and hopefully defeated."

All Out is right in that the petition did help immensely but the claim that it was the reason the bill was not enacted is disingenuous.

Even if Gay magazines publish the story with that spin on itover and over it doesn't make that any truer.

There is a struggle inside Ukraine over Russian people's immigration into the country and language which is threatening to tear it apart, again. The Parliament went on vacation instead of recognizing the speakers resignation in protest of a law recognizing Russian as an official language.

All Out.Org, do what's in the best interest of your members, don't be seduced by fund raising and self promotion.

All Out.org, don't deceive your members and become all HRC on us. Stay grass roots, Stay Real.