The DTAA fully supports UK Member Janice Caroline McCauley in her complaint filed with the Advertising Standards Authority(ASA) against Cartoonstock. Janice Caroline McCauley, frustrated by empty promises and inaction by Cartoonstock is asking ASA to help expedite the removal of the highly problematic "Tranny Gift" images from the company website.

We support her efforts for the following reasons:

Cartoonstock, a highly visible Internet commercial enterprise promotes the use of "Tranny" on its website which is considered offensive and defamatory to transgender people. The cavalier use of this defamation dehumanizes us enabling the discrimination we find at every turn.

Although Cartoonstock has promised a 'review' of the cartoons the company's website still displays all of the images in question days afterwards.

For the sake of Clarity this press release will address the cartoons in question individually explaining what exactly is offensive about each image.It is the hope of the DTAA that after viewing these images you will lodge a complaint with the ASA as well. Residency in the UK is not required. 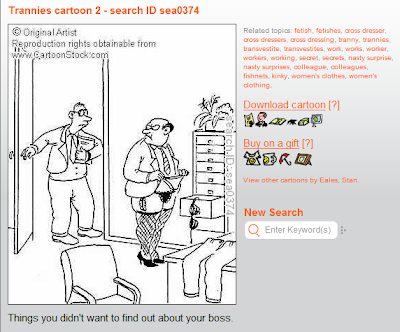 Transgender people are discriminated against in the workplace at a appalling rate. To a casual viewer the image suggests that the reverse also applies. What a employer doesn't wish to find out about employee, they are transgender or gender variant. 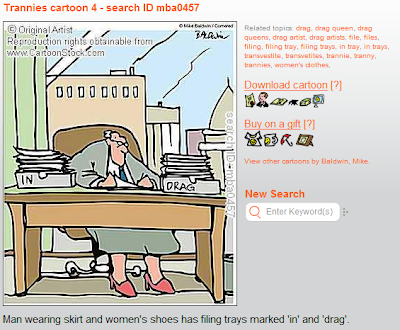 By association with the web page's name 'tranny' with transgender, the suggestion is transgender employees are simply men in dresses, or drag queens which feeds the lie that we are 'fakers' who's motivation is to invade female spaces putting unaware innocent cisgender people at risk. 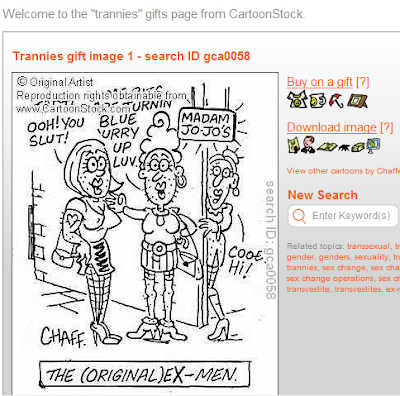 This image is the most offensive of all, with the actions being undertaken by the person on on right being purely speculative. The most common assumption being that 'he' is standing up and urinating. The image also dehumanizes the transgender experience by targeting the most vulnerable of our community, those who for various reasons are forced into survival sex work. It also a validates the lie that the original (reads, the real reason) the vast majority of people transition is our sexual orientation. 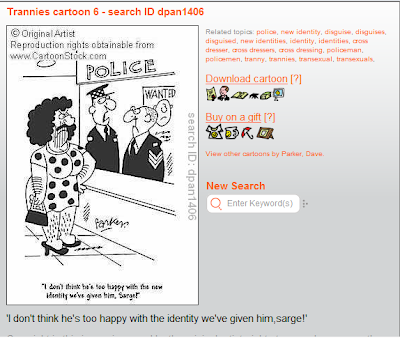 The above cartoon propagates the misogynistic male concept that females are somehow less than males. It suggests that ridiculing anyone, including police officers, who are non gender conforming in the workplace is acceptable and expected.

The complaint procedure is painless, only taking moments and is the most important component of this advocacy.

Click Here to file your complaint with the Advertising Standards Authority. UK residency is not required.

You can also add your voice to Cartoonstock: Stop using cartoons to ridicule Transgender people. It is not acceptable.

Click Here to view the original PR at the DTAA
Posted by planet trans at 7:38 AM

To those who have expressed concern about CartoonStock's treatment of transgender issues:

Please note that we have now completed the promised review of our cartoons relating to these issues and have removed many cartoons from CartoonStock that could be considered controversial. For instance a cartoon that was included in a recent submission to the ASA and labelled as the "worst offender" had already been removed from our site prior to that submission.

We want to be sympathetic to your cause and to only leave cartoons on CartoonStock that make a valid point about equality, prejudice and gender topics generally.

We are striving to tread a careful line between preserving free speech and not offending members of your community. We do not feel that obliterating all references to transgender issues from our collection would help your cause or free speech either, but where they have been retained, we have tried to catalogue those cartoons in a sensitive manner.

Whilst we may disagree on a few interpretations of what is a reasonable viewpoint, as will always happen in an open society, we do feel that since these issues were raised, we have been receptive, clear on the action we intended to take and have done what we said we would do.

We are trying to do the right thing but wish to uphold the reputation of our company and its employees. Any implication in a public forum that I or CartoonStock have not been good to our word, acted in good faith or hold anti-transsexual views is untrue an we're disappointed when our acts of good faith are not being received as such.

First off I'd like to tell you I appreciate you're willingness to communicate. We will need that channel open.

I will assure you that had that "most offensive" cartoon been removed from your site at the time I was posting I would not have included it in the complaint to the ASA. But it was odd, as the first time I looked it was gone and the second time it was moved to the 3rd position.

You stated that you feel you have done a reasonable review and made the changes you deemed necessary.

I do not think the changes that must be made have been made, beginning with the pages name, "Tranny". That word is highly dehumanizing and distasteful to transgender people.

Googling like defamation of other minorities results in only one category I could find and the cartoons on that page would most likely be considered inoffensive but not appreciated by the Hispanic peoples. I am only speculating about that since I am not Hispanic.

Why is it that a defamatory word, the word people use as they murder us, is acceptable for you to use?

Finally Mr Beardwell, I just visited your updated 'Tranny gift" page and clearly you have no idea about how damaging the replacement cartoons are.

No insult intended Mr. Beardwell, but there is a incredible ignorance on your part about the transgender community.

I would like to address your apparent feeling of being unjustly victimized by this social action.

The victims in this instance are not the people who have been profiting from the sales of images that lend credence to potential murderers looking for validation of their hatred.

The victims are my brothers and sisters who throughout millennium have been discriminated against, had there most basic human rights denied and in the "worst case" ended up just another blood stain on the sidewalk.

No Mr. Beardwell, you have not lived up to what society expects of you in the representation of transgender people.

It's not our intent to censor, only educate and failing that, to bring about change using the social infrastructure to elevate the gender diverse to a level playing field with the worlds Cisgender peoples.

We will help that process along to the best of our abilities.

Kelli Anne Busey
Living Authentically by the Grace of God since 2007.