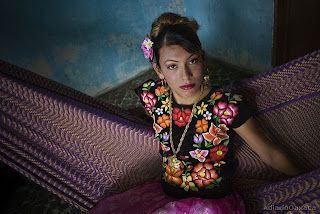 When TGirl Fan, a member of the Dallas Transgender Advocates and Allies who lives in Cd. Rio Bravo Mexico posted the article "Mexican Word of the day = MUXE". I beleive his intent was to educate us and the greater world there are cultures within present day Mexico's rigid gender expetations that not only are accepting, but are enouraging of transgender and transsexual people.

One commenter on the Youtube video observed: This is a pre-Hispanic custom, is not recent and are respectable and respectful. There is a very comprehensive documentary of a Mexican director and won several international awards for its approach and objectivity, it is a community that is part of our culture and roots, were the Spanish brought criticism and discrimination Queñes why offend? who are we to be so hard?

From the You Tube discription......According to myth, God entrusted San Vicente with a difficult task. On his back he carried a sack full of Muxes, and had to leave one in every town of the Zapotec kingdom.?

But when the Saint reached Juchitan he tripped, and all the Muxes he carried in his sack fell out. Since then, this town in the South-East of Mexico has experienced an unexpected - not only for Mexico but for the entire world -? sexual liberation. Homosexual men who wish to dress as women freely do so, and live a more or less similar life as their heterosexual fellow citizens. Not only do the Muxes not hide their difference on the streets of Juchitan, they actually project it in every way. Their fellow citizens simply go on their way, not impressed, provoked or angered by the sight of a man in women's clothes, hairdos and make-up. The Muxes claim they belong to the community of the "intrepid", of "those who do not fear death", and celebrate their desire and joy to be women every year in a festivity attended by the whole community.

In Juchitan, the dream of tolerance and the acceptance of difference has been a reality for years. Without announcements and declarations, without social movements having to fight long and bloody social and political struggles, without conflict and quarrel...

A documentary on the joy of life and love which prevailed effortlessly because San Vicente tripped...

Email ThisBlogThis!Share to TwitterShare to FacebookShare to Pinterest
Labels: Muxe of Oaxaca Zapotec