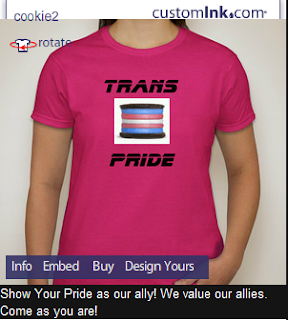 There are some Trans peeps who don't understand Isis King intent by wearing a "Gay is OK" T Shirt. According to Isis she is simply showing her respect for our gay allies, so in response the Dallas Transgender Advocates and Allies are launching a Trans Pride Tee and Trans Ally Tee Shirt Campaign. This is something we have been meaning to do for some time and given the recent misconceptions being propagated by the small but vocal separatist group, its high time we did!
You can order this or other Trans T Shirts directly from the distributor or design and proudly wear and share. Show your Trans Pride!