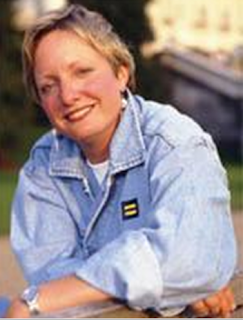 I could have titled this 'my how times have changed". Read a great article about this on the Dallas Voice but it really left a lot of history out. Dallas transgender history.

Actually it was a protest, then it wasn't then was a protest and it all begun with our petition that Bishop Robinson NOT attend the Dallas Black Tie and if he did, that he would refuse the Elizabeth Birch award. I ended up it making a backroom deal of sorts with Bishop Robinson that if he agreed to our "transgender Conversation", the first time he ever spoke publicly with transsexuals, and if we did that at the black tie, we wouldn't protest. Well I did anyways.

The Dallas Transgender Advocates and Allies membership was alerted and I started trying to get us a place to meet inside the black tie. No easy task. I was repeatedly ignored or just flat out told no time and again by the hotel staff until as luck would have one day I was recognized for who I truly am. 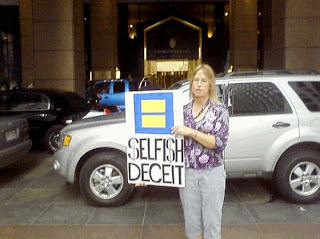 Handing my paperwork over one last time to the clerk expecting the same look of disapproval, being a highly visible anti HRC protester in the day, I was amazed by this young man who said "Oh I know who you are! You're one of the street people". (reads 99%er b4 that was a trademark)

Yes my gay young friend was right and giving me a look of adoration he said ya'got 300 bucks'? So we got our hall inside the Dallas Black Tie and our members flew from every corner of the country. Literally. It was that big of a deal.

Long story short,the Dallas Voice cancelled 3 minutes before the event, most of the seats were empty as gays ignored us, +Robinson refused to take the podium moving the only black ally at the meeting from his seat, refused to follow a moderator or answer questions to clarify his statement earlier in the year when he responded to our exclusion from ENDA with 'well better half a loaf than no bread at all'.

Another words it was essentially a bust and I was out that months rent. No one cared outside our trans community, including obviously +Robinson.

We were invited up to his presidential suit (paid for by HRC) afterwards. Not by Robinson of course, but by a documentary film maker desperate for some drama. The drama didn't come until we were on our way down the spiral staircase and Vanessa Foster ripped her shirt off revealing a beautiful "Transsexual Menace" T shirt:D

So filled with all that disappointment and energized by Nessie's T shirt we all went out of doors, grabbed our signs and continued with what we knew best. Being street people.

Times sure have changed. New HRC president. A transgender inclusive HRC mission statement brought about by our protests. I would love to see Chaz receive his award but one thing hasn't changed. I can't afford the ticket. Wonder if I could get the Dallas Transgender Advocates inside again? Hmmmmm....
Posted by planet trans at 1:05 PM