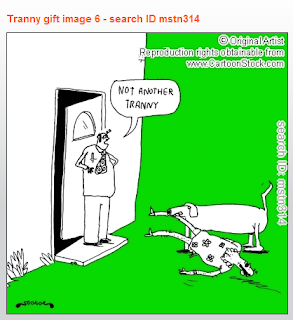 Dallas Transgender Advocates and Allies Action Update to remove Cartoonstock's sick transphobic images, the good, the bad and the horiffic......

Good: Cartoonstock has replaced the worst of the 'tranny gift' cartoon with other cartoons after becoming aware of our members ASA complaint.

Bad: The slew of cartoons they replaced it with are even worst like the one to the left.

These are the replacement images currently being sold by Cartoonstock. Why they are bad by the numbers.

1) The site retains the name "Tranny" knowing those who google search "Tranny", the #1 SEO, are people who seek to ridicule and belittle us.

2) Image #6 "Not another tranny" gives visual to the perception that our lives are of no more value than "another" dead "tranny" being dragged to the door by someones dog! Are YOU serious Mr. Beardwell? REALLY? Serious? Not funny. Hateful. Sick. Must be removed.

3) image #7. "Can You Keep a Secret". This cartoon gives a image to those who already believe transgender people some incredibly repulsive creature. And believe me Mr. Beardwell, there are many who believe that with every fiber of their being.

Image#2 "News Flash". On the average historically, there are 3 transgender people murdered worldwide every week. Having reported on many of them through the years I will attest the vast majority of the murders happened during or immediately following intimacy.

The reality is the vast majority of those murders happened simply to assuage the killers ego or because the murderer was afraid what his peers would think if they found out he slept with a trans person.

The look on the person face standing in the hall is that of "Transpanic", the look of death being the last thing seen by our sisters and brothers so many times, over and over. You think thats funny, or socialy acceptable Mr. Beardwell?

Click this image for the interactive map showing 800+ transgender murders since 2008. The blinking dots indicate the blood has not yet dried. Countries like Russia don't show any becuse they are not reported. 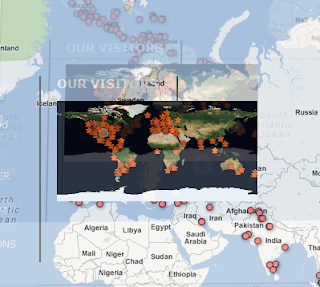 The following comment was posted by Ed Beardwell from Cartoonstock on the planetransgender post: Press Release: In Support of UK Member ASA Complaint Against Cartoo...

To those who have expressed concern about CartoonStock's treatment of transgender issues:

Please note that we have now completed the promised review of our cartoons relating to these issues and have removed many cartoons from CartoonStock that could be considered controversial. For instance a cartoon that was included in a recent submission to the ASA and labelled as the "worst offender" had already been removed from our site prior to that submission.

We want to be sympathetic to your cause and to only leave cartoons on CartoonStock that make a valid point about equality, prejudice and gender topics generally.

We are striving to tread a careful line between preserving free speech and not offending members of your community. We do not feel that obliterating all references to transgender issues from our collection would help your cause or free speech either, but where they have been retained, we have tried to catalogue those cartoons in a sensitive manner.

Whilst we may disagree on a few interpretations of what is a reasonable viewpoint, as will always happen in an open society, we do feel that since these issues were raised, we have been receptive, clear on the action we intended to take and have done what we said we would do.

We are trying to do the right thing but wish to uphold the reputation of our company and its employees. Any implication in a public forum that I or CartoonStock have not been good to our word, acted in good faith or hold anti-transsexual views is untrue an we're disappointed when our acts of good faith are not being received as such.