Savannah Dietrich, 17 Year Old Raped and Facing Jail Time For Talking About It. 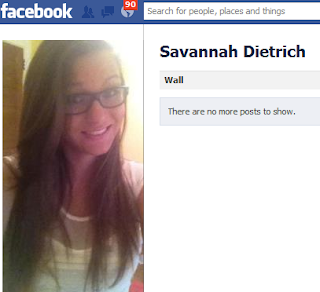 ***** Update 7/23/2012...Contempt charges against Savannah Dietrich have been dropped according to the AP. The rapist's lawyers deny public outrage influenced their decision however, they recognized that had they not dropped the charges the rapists would not have been able to hide behind their minor status as adults because their names would have become public domain.
The petition author Elizabeth Beier was interviewed by the AP in that article recognizing the Power of social media.

We are that power.

I only learned of Savannah Dietrich's story by chance, happening across a unattributed single post Tumblr page tittled She Who Loves The Rain.

Savannah's Facebook Profile and Twitter accounts are protected, save for the hashtag #TEAMDEVIN listed on her Twitter account and a link to her Facebook. Following associated #TEAMDEVIN tweets brought me to this heart wrenching You tube. Going strictly by the information from the Tumblr page which appears to have been reblogged from the Huffington Post I will repost in full here because by all accounts she wants her story to be told in full.

The Louisville, Kentucky teen told The Courier-Journal she was frustrated by what she feels is a lenient deal for her attackers.The Mail Online does not normally report the names of sexual assault victims, but Dietrich and her parents say they do not want to shield her identity and want her case to be public.

The boys’ attorneys have asked a judge to hold Dietrich in contempt for violating the confidentiality of a juvenile hearing and the judge’s order not to speak about it.Dietrich told the paper she was assaulted in August 2011 by two boys she knew when she passed out after drinking at a gathering. She learned months later that pictures of the assault were taken and shared with others.‘For months, I cried myself to sleep. I couldn’t go out in public places,’ she told the newspaper, as her father and attorneys sat nearby. ‘You just sit there and wonder, who saw (the pictures), who knows?’

Dietrich’s attorneys want her contempt hearing open to the media, arguing she has a First Amendment right to speak about her case and to a public hearing. The boys’ attorneys, however, have asked to keep the hearing closed. The contempt charge carries a possible sentence of 180 days in jail and a $500 fine. The boys pleaded guilty on June 26 to first-degree sexual abuse and misdemeanor voyeurism.

Dietrich says she was unaware of a plea agreement until just before it was announced in court. She could not say what the proposed punishment was because of the court order, but said she feels like it was a slap on the wrist. The teens are to be sentenced next month, and the judge could reject or modify the terms of the proposed agreement. When Judge Dee McDonald admonished everyone at the hearing not to speak about what happened in court or about the crime, Dietrich said she cried.‘They got off very easy … and they tell me to be quiet, just silencing me at the end,’ she said.

Afterwards Dietrich tweeted, ‘They said I can’t talk about it or I’ll be locked up. ….Protect rapist is more important than getting justice for the victim in Louisville.’

David Marburger, an Ohio media law specialist, said Dietrich should have tried to get the courts to vacate the gag order rather than simply violating it. But Gregg Leslie, interim executive director of the Reporters Committee for Freedom of the Press, said Dietrich should ‘not be legally barred from talking about what happened to her. That’s a wide-ranging restraint on speech.’ Leslie said this sort of issue is becoming more common.‘

In the past, people would complain to anyone who would listen, but they didn’t have a way to publish their comments where there would be a permanent record, like on Facebook and Twitter, for people to see worldwide,’ he said.Dietrich said she just needed to stand up for herself. ‘I’m at the point that if I have to go to jail for my rights, I will do it.’