"Equality For All Texans Support HB 538" 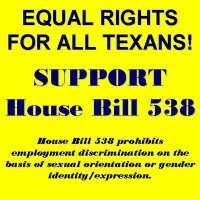 "Equality For All Texans Support HB 538" A Facebook Group which is seeking to inform and gain support for the introduction and passage of a Sexual and Gender workplace non discrimination bill in the present session of the Texan Legislature.

House Bill 538 prohibits employers from discriminating on the basis of sexual orientation or gender identity/expression.(Click here for HB538 Text)

GET INVOLVED:
1) Call your state representative directly and inform him/her know that as their constituent this bill is very important to you as well as why it is important. And ask your friends and family call their representatives.
Click here to find out who your State Representative is.

2) Pass this information to everyone you know whether or not they are gay.

HOW A BILL GET'S PASSED AT A GLANCE!

2) In a few weeks the bill will get assigned to a committee.

3) A hearing is then scheduled in which any one (including you) can go before the panel and state your case. (Once the bill get’s to this step everyone will be informed so that we can all caravan up to Austin to state our
case.)

4) The Committee will vote on whether or not it will go before the House of Representatives and if the bill is approved by the committee:

5) The bill then goes to the Calendar Committee which schedules the bill for a vote. (This is a process that we as a community need to monitor closely because
not all bills get scheduled. If a bill does not get scheduled then it dies.)

6) At the time determined by the Calendar committee The House of
Representatives will then vote on the Bill. If the bill passes:
7) The State Senate will vote whether or not the bill goes before the Governor.
If the State Senate approves the bill:

8) The Governor will then have final say as to whether or not the bill becomes
a law.

awesome thanks reposting this at 2pm