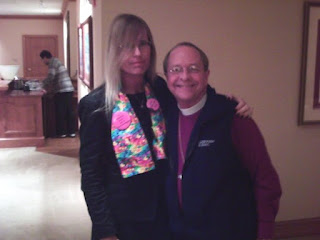 Tomorrow, in one of the most humbling honors of my life, I will deliver an invocation at the first event of inauguration week.
Though many of us were deeply upset when President-elect Obama chose Proposition 8 supporter Rev. Rick Warren to speak at his inauguration, the fact that he also invited me – a proud gay man – is a hopeful sign of our president's commitment to reach out to all Americans.
Now it's up to all of us to capitalize on this moment and ensure that President-elect Obama works for equality.
Join me in asking Obama to take the next step by supporting HRC's Blueprint for Positive Change – a roadmap for LGBT equality."~Bishop V Gene Robinson

I support HRC's roadmap to equality because it is in the best interest of the entire GLBT community.

What brought bishop Robinson into this picture above with the Dallas Transgender Advocates and Allies(DTAA) is the gulf of misunderstandings and ignorance of the established church about transgender and Queer issues and sensibilities. The Dallas Black Tie inc. which was hosting Bishop Robinson and presenting him with the Elizabeth Birch Award later that evening was ironically named for a former president of HRC who is credited with saying she would "include transgender people in ENDA over her dead body" .

The Dallas Black Tie Inc. presents HRC with roughly $400,000 dollars annually from this event alone. I protest HRC for inexplicably blindsiding Queer and transgender people in a backroom deal, removing us from ENDA (HR)2015 and assenting to Congressman Frank in dividing our communities human rights movement in 2007. The words Bishop Robinson and I spoke during or conversation were often foreign and left unresolved misunderstandings. In my heart of hearts
I still beleive and have personaly witnessed in our own church's how transgender people because of our highly visible hacking, beating and shooting deaths are being used by HRC as sympathy garners and a method of raising money to party at "Gala Events".

A despicable and unchristian practice.

Yes Joe Solomese and Bishop Robinson, others have also noticed.

HRC will have to prove to me by being a loyal and trustworthy advocate over time you are a worthy ally. This is a demand, not a request and is nonnegotiable.

The fact Bishop Robinson attended the Dallas Transgender event speaks volumes of the progressive nature of our Episcopal Diosese of New Hampshire and we should give accolades to Bishop Robinson for this great achievement, however we cannot assume Queer and Transgender concerns are being voiced at the table with the same passion and equity as Gay and Lesbians are by Bishop Robinson.

I personally feel that the Transgender Community has an opportunity and an obligation to step up and let ourselves be heard NOW. We can not rely on ANY central group to secure our place in history. It is up to you and me everyday in small and large ways to be the change.

planetransgender
Dallas Transgender Advocates and Allies(DTAA)
Posted by planet trans at 8:15 AM