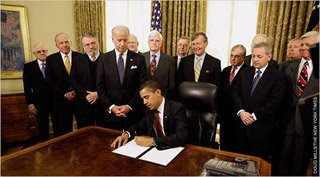 "If there was any doubt that a new day is dawning in America, it has been washed away by the events of [last week]."

"I am speaking about the three executive orders that President Obama signed yesterday. They represent a significant victory—a victory for which Human Rights First has fought relentlessly over the past seven years. And you have been there right alongside us the entire way."

"Standing next to the president as he signed these orders were 16 members of Human Rights First's coalition of retired military leaders. Over the past several years, Human Rights First has brought together more than 50 generals and admirals to speak out against disastrous policies of torture, ill treatment, and indefinite detention."

"Taken together, these executive orders end coercive interrogation practices by the CIA and other U.S. agencies, shut down secret detention facilities, and order the closure of Guantánamo within one year."

Please take moment now and send a thank you to President Obama for his action. Let him know that you will support him in making sure that America's leadership is fully restored.

Posted by Kelli Busey
January 25, 2009
planetransgender
Posted by planet trans at 5:23 AM