The story line. Man found beaten unconscious outside a shady strip club. Detectives discover a press on nail close by. The only logical reason for it's being there was a sleazy low life whore lost it while committing or witnessing so they immediately began investigating the clubs dancers, after all who else could that press on have belonged to?( not me I get them done at a salon, and cost $20. clearly not a 'press on')

I do however support our sisters when they have been discriminated against. 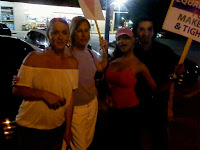 (thats me second from the left) the one with press on nails.

The detectives interviewing a pretty fully clad wasp soon discovered a flaw in a young woman's alibi, and confronted her with "what would your parents think" in hopes of dislodging the truth.
Of course she was not a whore, or kinda just a little whoreish. But this still does not solve the mystery because she was not large enough to have done the deed.

Now the show takes a nose dive to the garbage bin, or so it would seem....

Entering a room with the mother present the two detectives begin interview a dressing preteen who with shirt off defiantly answers the detectives inquiries. Lots of full frontal chest nudity. Copious gratuitous chest nudity. Camera backs off as the teen puts on a top and presto the detectives learned she is a transgender girl....

Where would the transgression and immorality of strange adults entering a pre teens room while she was half naked become an issue for a mother? After the audience's curiosity as to what a transgender breast looked like?After the teen had shown enough femininity to satisfy the audience she was passable? Why not have her fully disrobed so the audience can make a determination about her genitalia? Is this question two "Deep" or would that be crossing your line of morality vs entertainment?

The mother clearly was knowledgeable of the teens gender expression why would she allow two strangers to see her half naked daughter without a lawyer about a felony?

Do the producers feel that offending transgender sensibilities such as offering half naked girls would be offset with the upturn in the shows plot when it began a sensitive and honest exploration of the most important aspects of transition?

Just a TV show? Ok but why is the nudity of this transgender girl ok? What would the repercussions be for a network if it broadcast a preteen cisgender female breast.

This was a morality malfunction.