Pre-op Females: Is it OK To Sauna With Cisgender Minors? 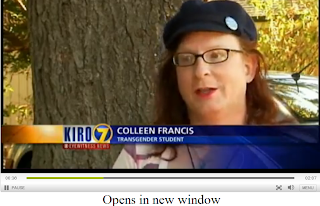 I agree with the Radphlegm GallusMag on this one thing (minus her blind hatred of course) in that I believe it is our duty as pre or non op trans people to respect cisgender people in places where clothing or the lack, of might on occasion accidentally expose intimate areas, like a sauna.

I know being a radical transsexual this will suprise some, but there's a reason...

With power comes responsibility and the exercise of that power responsibly is the fastest and surest way to be granted even more dignity. I come to this belief when as a formally male misidentified person who had by virtue of my external gender expression held great power at times. Male privilege is the reason I concur with the Radphlegm's so the loud popping sounds you might be hearing is probably their heads exploding.

I couldn't find any of the damning evidence the Radphlegms offered as proof of Colleens alleged deviance humanity but I found this on her Facebook wall: 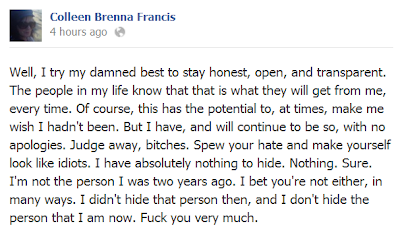 I have to admire her courage and spunk and as a landlocked waterbaby I understand Colleens attachment to the Ocean but it's not 1959 Alabama and this isn't even about time. It's about grace which will win hearts and minds faster than enforcement of any law will.

Personally I feel it would be pretty cool if Colleen were to use the smaller facility especially now that the battle has been won. But beyond that do you think given laws that permit us, should we sauna with minors? Take the poll on the top right bar.

Not sure about the terms of reference. I'm used to mixed saunas where clothing or strategically placed towels would attract ribald comment and minors aren't treated as a problematic distinct group. Maybe this is more about USian puritanism ?

I think it's a remarkably sensitive topic to discuss "male privilige" in regards to trans women. Not that male privilege can't have ever existed some trans women, but I think it's fairly apparent that in some this may not be the case, and of course the privileges and advantages afforded to men aren't automatic in all cases.

Its a tough conversation. Is male privilege automatic based on sex assignment? Is it based on upbringing? If a child assigned as male at birth is raised as female from the moment they left the hospital would that be a child who possesses male privilege? What about trans kids? Tose of us who transitioned in our childhood never experienced an adulthood interpreted as "men" and can it be said we possessed that kind of power? Is it commutative?

I don't know, are we to only apply the test of "power" as you put it only in cases where a certain threshold has been met?

I guess I just object to the insinuation that just because an individual's genitals are in a particular configuration that they must posess a certain power.

If the reason we mark trans people as different and should be shoo'd away from certain spaces is a power differential, should the same be true in the trans community itself?

I'd venture to say that the reason we have these objections to, say, trans women in nude saunas with children (are kids really going to saunas? How bougie..) has to do with a puritanical difficulty with nudity, patriarchal association of certain genital configurations with "power" and a trope of trans women literally being a threat to women and young girls.

Personally I think often each case is complex and I'd venture to not say one way or another in every case.

But TBH this sort of thing seems off my radar as major issues with our sisters dying all over Latin America.

The girls and girls' parents shouldn't have any problem with pre-op trans women, but the compromise here is not difficult. It's called a towel...

I'm pre-op. I pass and I use the ladies' rooms all the time, but I can't think of a good reason for exposing myself like that, given that I might offend. I've also been outed in the ladiess room (by my friends or voice or whatever) and the course of action has been to remain confident and do what I came to do.

Choose your battles, I say.

Dear all:
We all have several civic rights and responsibilities, so lets be clear on our T" issues. First, not for fear of bigotry or hate, is the very simply fact that the respect to others equals our survival, I want to mean that meanwhile non of us is POST OP, we all have to minimize any risk that attempts against our security, what for a pre-op wish to enter a ladies only sauna? To create controversia? to be intimidated, or create a new first page in the yellow pages " T- Girl Killed on Public ladies Sauna, she drop her towel!" Come on Girls , use a little bit that common sense and your fucken brain! I pass perfectly well under any situation,voice, body and almost everything, but I am still in pre-op I respect any others spaces , I don't mix with situations that can endanger my self!. So same reccomendations to any other pre-op girl, do not trespass these limits your safety is first. If is too much the urgency to get in a sauna there are many options, first , there are some MIX Saunas, second , I still think no need of such exposure so you can easily rent a PRIVATE sauna!
Gold Rules, 1: Safety is first
2: Be Intelligent, use the common sense
3: Be Safe and Inteligent, dont expose your self to danger!
4: Respect others as you deserve
5: Wait till surgery and be causious, Saunas are full of deaseses you can get!

Have a beautiful day!