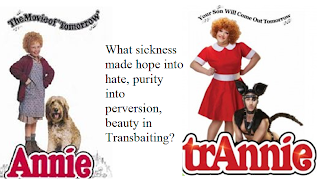 "Prepare for an uproarious Christmas when Sydney Opera House presents an adults-only panto..."

Since 39AD the panto or pantomine  has used  stage fights, coarse humour and fantastic creatures to mock reversals of gender roles at great profit and the British/Australian Christmas season's tradition carries on today with the gay perversion of Annie.

It's called  trAnnie  and despite clearly being a violation of the New South Wales vilification and Discrimination Act. the producers say this show monetizing this thinly disguised adaptation of the highly demoralizing defamatory word  tranny, will go on.

The sick albeit brilliant (if not for most of the key elements) Synopsis:

A orphan transgender child abandoned by her parents is desperate for sexual reassignment surgery(SRS) and will do what ever it takes to please her convicted paedophile transgender care givers including performances for a demented older man in order to get money or SRS.

Not having seen the production and the incredible amount of maneuvering room the writers have left themselves I find these elements unconscionable:

Tranny. The single word the trans community despises, but crucial to the show "trAnnie".  The title must be changed. Gays must stop exploiting there association with transsexuals and cease excusing this gross injustice perpetrated against trans people by claiming this  absurd proprietary right to the "T" word.

Live my life 24/7 as a visable trans woman, face the injustice I face in the grocery store, in the doctors offices, with my neighbours, in my workplace on a daily basis THEN you will have equal rights to the reclamation of this defamation.

But despite and in spite of local transgender outrage  gay people continue to depend on indigent gender gifted peoples angst in the past with "Ticked off tra$$ys with knives"  and do so again for this productions promotion .

Paedophile. Years ago homosexuality and pedophilia were thought to be the same and like a tire necklace hanging around their necks gay's fought tooth and nail in a desperate battle with hate mongers of all types before they could rid themselves of that association and to escape being pathogized as child molesters by the APA in the DSM.

Now Trevor Ashley and other gay men,  supposed allies of transsexuals, writers, producers and actors of "trAnnie"  are putting this tire of hate around our necks, just for fun and a few bucks.

This trivialization of  sexual reassignment surgery especially when in context of a youth in despicable. Do these gay men have no idea of how impressionable and emotional transgender youth are or is it as I suspect, they just don't care as long as it's amusing to them.

The misgendering of the the child in the synopsis. This is reprehensible and if allowed to continue by this theatrical company will directly contribute internationally to the hardships, murders and suicides of all gender variant youth.

This places the onus of action on the international transgender and allied community. It is our obligation to speak up against this horrific travesty.

This show must not go on. For our children's sake.

Tell the Sydney Opera House not to make transphobia a Christmas institution. Send them a message by using their in house form here  and posting on there Facebook page.

Nice article, thanks for the information.
Steph @ rental mobil jakarta