Lana Wachowski transgender Cloud Atlas director reveals pain suicide attempt on Huff Post. She talked about going to a train station, standing on a platform readying herself to jump, but held fast by the stare of a 'old man'.

*the video does not have Lana Wachowski in it but is excellent commentary.

Huffpost reader oatc commented   on the article:  “For whom would she be a transgendered role model? Would anyone want to wait until the age she transitioned, to wear a slip under boys clothes to school, to experience desire to suicide, to endure so many years of pain, and wait until half one's life had gone? She can be a role model for aspiring film people, writers, public speakers, or those who would be brave, and survive though. Of any gender." "The role models for transsexual children today are girls and women, boys and men." 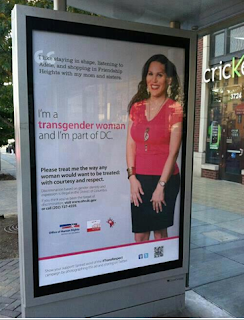 The reality is given our current albeit improving social status is most of who are alive today have there own 'old man' on the train platform to thank for that.

But it is a brilliant observation by oatc and so true. We have to first envision ourselves as a success before the process of succeeding can even begin in our lives.

My old man on the platform the day I tried to commit suicide was, I don't know.

I stole a bottle pain relievers from ironically the man who was my chief antagonist, my father, drove my old pick up to a stripper bar and downed the whole thing. The only thing I remember of the following two days was Black Sabbath Iron Man playing on my 8 track and how pissed my mother was when I dragged my teenage ass back home.

Do I expect more from myself now? Yes and I get my new life thanks to my real old man on the train platform, my LGBT people. You. I get my sobrity of the past 25 years thanks to god.