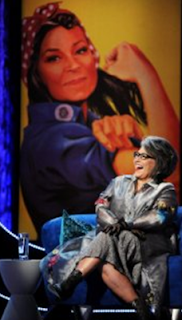 Roseanne Barr is a Radfem,

Cathy Brennan  thinks so anyways, but should we pigeon hole her with such obnoxious haters as Brennan?

Lefty Girl leaves not much maneuvering room for Barr.


Roseanne defended her wide brush stroke transmisoginist tweets on her website  as defensive in response to a onslaught of transgender and transsexual's because one of one misunderstood tweet. Barr didn't post the offensive tweet but Jezebel sniped them so I'll do that for her. 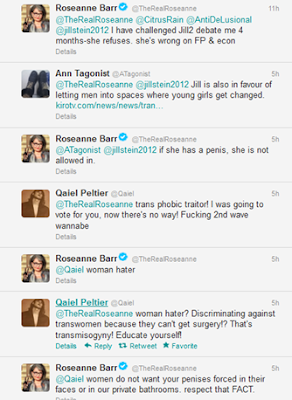 Epic fail. In the grandest of Radfem traditions Barr works her anti trans agenda by associating us with of all things her acceptance of pedophilia.

A common tactic of our most vile haters.

Barr has sort of apologized for tweets before but obviously she has not gleaned an important gem of knowledge about tweeter. Every Tweet stands on its own, lashing out in anger, no matter how justified you feel you are has consequences.

If you act like a Radfem you are a Radfem. Perhaps Barr will learn from this experience, if you tweet offensively towards trans people you will suffer the consequences.