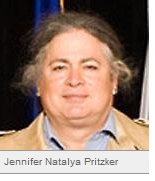 Retired Colonel Jennifer Natalya Pritzker gave 1.35 to Palm center earlier this year to help study transgender peoples feasibility in the service has announced her transition from male to female. The Palm center was instrumental in helping repeal DADT for gay people.

A statement released by email published by chicagobusiness.com said this:

"As of Aug. 16, 2013, J.N. Pritzker will undergo an official legal name change, will now be known as Jennifer Natalya Pritzker. This change will reflect the beliefs of her true identity that she has held privately and will now share publicly. Pritzker now identifies herself as a woman for all business and personal undertakings."

Indra Lusero, the project director of the Palm Center’s Transgender Military Initiative, has commissioned 16 scholars to conduct 11 studies investigating “whether and how the U.S. armed forces could include transgender troops without undermining readiness” — in areas ranging from privacy and medical accommodations to the experiences of foreign militaries and sports programs.

“This academic research will inform an important public conversation by providing facts and evidence about transgender military service and gender expression in armed forces. Militaries around the world are updating their policies, and we are already conducting research in Canada, Britain and Australia to learn whether their trans-inclusive regulations have impacted readiness,” Lusero said in a statement provided to Buzz Feed.