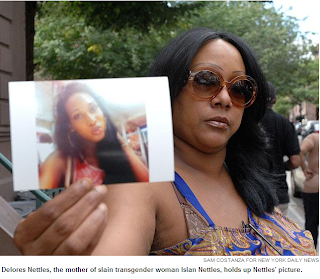 Saturday just after midnight, Islan Nettles, a 21-year-old fashion design student was walking down 8th Avenue near West 147th Street right in front of a police precinct, when a group of men started saying some very mean things.

Police say one of the men was 20-year-old Paris Wilson, who they say punched Nettles, knocked her down, and wouldn't stop.

She was taken to Harlem Hospital with severe head trauma where she slipped into a coma and was pronounced brain dead Tuesday. ~ ABC Local

A spokeswoman for the New York City medical examiner’s office, Ellen Borakove, said on Friday that the death had been ruled a homicide and the cause was “blunt force trauma.”

Ms. Nettles, who, according to her LinkedIn page, was an intern assistant designer at Ay’Medici, a Harlem fashion company, was walking with a group of transgender friends on Frederick Douglass Boulevard between 147th and 148th Streets when they encountered several men across the street from the station house of Police Service Area 6, which patrols public housing developments in the area.

When the men concluded Ms. Nettles and her friends were transgender, a scuffle broke out, the police said, with punches thrown and homophobic slurs shouted. 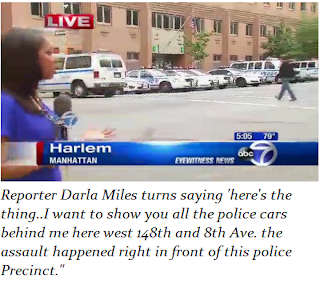 A 20-year-old Harlem man, Paris Wilson, was arrested late Saturday and, according to a criminal complaint, was charged in the case by the Manhattan district attorney’s office with misdemeanor assault and harassment. At the time of the arrest, police officers did not realize that the confrontation might have involved bias. At some point later, prosecutors said, a witness went into the Area 6 station house and told the police that homophobic language had been used.

Prosecutors also said that more, and graver, charges could be filed against Mr. Wilson, who on Friday remained free on bail.