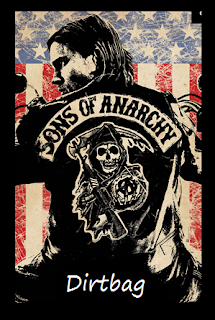 It is so embarrassing and humiliating to watch this cisgender woman announce that Walton Goggins played a transgender rapist in this FX episode of Sons of Anarchy.

For the record, Walton Goggins did not 'transition' anything as he said he did. He's not even a drag queen. He's a cisgender actor who pasted on some fake tits, donned a dress, heels and acted like a degenerate immoral dirt bag.

Just what he and the FX writer intended. They knew the latest FX episode “Orca Shrugged" would garner them immense free publicity and all they had to do was sit back wring their greedy hands and wait for the outraged  reactions from buddytv.com  and this to come rolling in. Yeah, as a biker riding for the past 36 years its my experience when you cross the line you get called out for it.


In the finest tradition of biker sisterhood and brotherhood I have one thing to say about this piece of shit. Walton Goggins, you are an asshole dirtbag, but you already know that, don't you?
Posted by planet trans at 9:54 AM

My sister suggested that I should order a size down--being an 8-10 with a C cup, I got an 8, and it's pretty good. (I got a red dress) it was thin, and needed some ironing.
Brandy Melville