According to Fox 10 KSAZ News this is the Craigs List posting by Donald Waelde which resulted in the arrest: 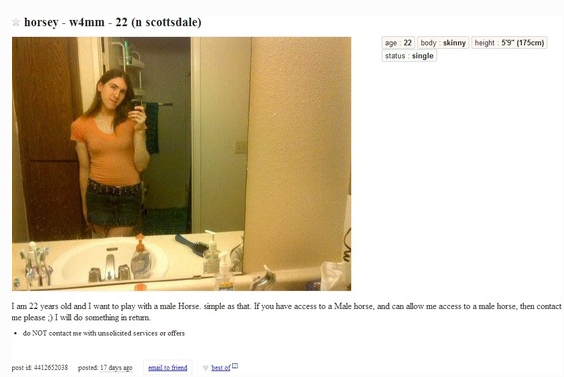 Mr. Thomas, who anchors and reports for KOLD 13 and FOX 11 in Tucson cross posted the Fox article on his facebook page but  has removed references about about Donald Waelde's alleged transgender status, after some pointed out that had nothing to do with the alleged crime.


Fox news habitually misgenders transgender people making fact checking that much more difficult. This problematic article has remained unedited on Fox. I am not faulting Thomas for including this persons trans status in this article, if indeed it is true, I'm just asking for verification that this is a 'transgender man'. I commend Craig Thomas for responding so quickly.

This is not "Fox News" reporting, it's a local Fox affiliate (that also happens to be a CBS affiliate). Considering your concern for accurate labels, it's pretty ironic how quick you are to blame this on "Fox News"...