The day after Monica Jones was profiled protesting the failed religious discriminatory law in Phoenix, she was offered a ride while walking to a bar. The driver turned out to be an undercover police officer who then arrested her for "manifestation of prostitution'.

This law is a vague statue which enables officers to arrest woman for no other reason than asking if they are police. The law is used to feed people to "Project Rose" as the city conducts massive drag nets hauling in dozens of individuals at a time. This profiling of woman by police is contested by the Arizona ACLU which notes that "The difference between 'innocent' and 'criminal' behavior often comes down to how a person looks.

A 2011 study  in NYC found that 59% of transgender respondents said that they had been stopped by police. So over half of our sisters in NYC had they lived in Phoenix would have faced the prospect of "Project Rose".

Busted for "Walking While Trans"

"the only thing that needs to be changed is the system. if they come for me in the morning they're coming for you in at night" -Monica
— SWOP Phoenix (@SWOPPhx) April 11, 2014 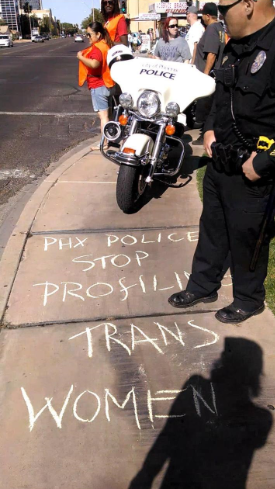 Since Jones hadn’t been previously charged with similar ‘crimes’ she was offered a deferral if she enrolled in “Project Rose” and successfully completed it.

Project Rose, which has a 28 percent success rate, shouldn't be condemned for its low percentage of successful completions. But anyone who has gone through drug rehab knows that number is most likely inflated and since there is no information available on the recidivism rate it is pretty meaningless.

In conception, it's not a bad idea except.....knowing a conviction was guaranteed leaving no option,

It requires a person, who may or may not have broken a law, help in finding employment, even if they don't want that help...

"My protesting of project ROSE is related to my activism for human rights and civil rights"- Monica Jones on the stand #StandWithMonica
— SWOP Phoenix (@SWOPPhx) April 11, 2014 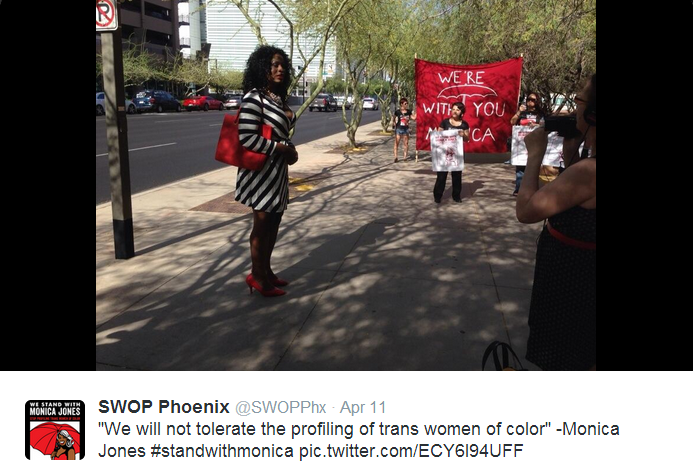 Project Rose's capstone is religious and moral programing, even if they don't want it.

Run in conjunction with the City of Phoenix Prosecutor’s Office, our program provides 36 hours of self exploration and education to develop self esteem and give hope. Participants also receive rehabilitation services including support, education, and treatment to help them escape prostitution. Job placement assistance is also provided. Those who complete the program have their charges dismissed."


"I believe I was profiled as a sex worker because I am a transgender woman of color, and an activist

But the court refused to recognize the unconstitutionality of the law and convicted Monica even though two witness testified that the officer was the one who approached Monica, invalidating the key provision of the law leading to her arrest.

"I'm facing 30 days in jail, this shows how unjust the justice system is. Because I was out there walking" -Monica #StandWithMonica
— SWOP Phoenix (@SWOPPhx) April 11, 2014

PHOENIX--- Over 50 supporters rallied in front of the Phoenix Court house this morning in support of ASU student and anti-1062 activist Monica Jones. Ms. Jones was facing unjust charges of “manifestation of intent to prostitute,” a vague and discriminatory law that criminalizes activities like waving at cars, talking to passersbys, and inquiring if someone is a police officer. The ACLU of Arizona joined Jones’ lawyer in contesting the constitutionality of the manifestation statute. Dan Pochoda of the ACLU explained in his arguments, “The statute eviscerates first amendment rights.” In a packed courtroom filled with supporters wearing “I Stand With Monica Jones: Stop Profiling Trans Women of Color” t-shirts, the judge found Ms. Jones guilty based solely on the statements of the police officer who targeted for her race and gender. Supporters across AZ and the nation are in an uproar about the injustice of this ruling.

In Arizona and across the country, trans women of color like Ms. Jones are routinely profiled and swept up in the criminal justice system on prostitution-related charges, due to a phenomenon many call “Walking While Trans”---a widely held belief by law enforcement and others that all transgender women are criminals. Because of the injustice that leads people to take pleas against their best interest due to lack of community support, Ms. Jones decided she was going to fight the charges, so that no more trans women, sex workers, or people profiled as sex workers would have to face these injustices. Ms. Jones has remained adamant about her innocence, and that sex workers need rights, not arrests. Ms. Jones stated after the verdict, “As an African American and as a woman, the justice system has failed me.”

In light of this devastating ruling, SWOP Phoenix (Sex Worker Outreach Project) and Monica Jones will fight the case in an appeals process, while building national and international momentum against unjust policies that target trans women, people of color, and sex workers. SWOP Phoenix is calling on people from around the country to keep demanding justice for Ms. Jones. Meanwhile, the UN Special Rapporteur on Human Rights Defenders is monitoring the trial as an example of discriminatory policing and retaliation on activists organizing for human rights.

Ms. Jones states, “I am saddened by the injustice that took place at my trial this morning, but we are not giving up the fight. It’s time that we end the stigma and the criminalization of sex work, the profiling of trans women of color, and the racist policing system that harms so many of us.”

Journalist Jordan Flaherty did the first reporting on this story, for Al Jazeera America. You can see his report here: