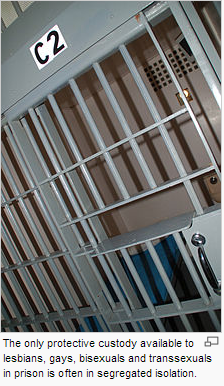 Transgender people are at particular risk of violence and rape while incarcerated. A problem which the 2003 bill was designed to help prevent, but Perry says the regulations which are mandated for implementation by May 15th, are federal interference with state governance and are too costly.

The AP is reporting  In his letter, Perry cited a portion of the law that bars cross-gender searches and seeing inmates without clothing, saying that because 40 percent of prison guards in male units are women and complying with the law may mean the loss of job and promotion opportunities."

The state also will not raise the age — from 17 to 18 — at which it treats inmates as adults, Perry wrote. The rules, he added, do not allow for “differences among the states.”

States that do not comply could lose federal grant dollars. Three grants that totaled $23.9 million last year could be subjected to partial cuts, Perry spokeswoman Lucy Nashed said, adding that Texas has not been told how much money could be at stake.
County jails and local lockups can take measures to comply with the federal rules. Some already are, including the Harris County Jail, which revamped policies regarding the housing of gay, lesbian, bisexual and transgender inmates.

Do transgender prisoners have a right to be housed in a facility consistent with their gender identity?

Transsexual people who have not had genital surgery are generally classified according to their birth sex for purposes of prison housing, regardless of how long they may have lived as a member of the other gender, and regardless of how much other medical treatment they may have undergone[1] -- a situation which puts male-to-female transsexual women at great risk of sexual violence. Transsexual people who have had genital surgery are generally classified and housed according to their reassigned sex.

Do transsexual prisoners have a right to obtain hormone therapy while in prison?

Some transsexual prisoners are able to maintain their hormone treatment in prison.[3] The policy of the U.S. Bureau of Prisons is to provide hormones at the level that was maintained prior to incarceration. Specifically, the policy provides:

“It is the policy of the Bureau of Prisons to maintain the transsexual inmate at the level of change existing upon admission to the Bureau. Should responsible medical staff determine that either progressive or regressive treatment changes are indicated, these changes must be approved by the [Bureau of Prisons] Medical Director prior to implementation. The use of hormones to maintain secondary sexual characteristics may be continued at approximately the same levels as prior to incarceration, but such use must be approved by the Medical Director.”[4]
Even if the prison does provide hormones, however, there is no guarantee that they will be provided at the appropriate levels and with the necessary physical and psychological support services.[5] In addition, it is often difficult for transsexual prisoners to document a prior prescription for hormones, either because of the practical difficulties and limitations imposed by incarceration, or because many transsexual prisoners are indigent and do not have private physicians willing to advocate for them. Moreover, even when transsexual prisoners are able to provide sufficient documentation, prison officials may disregard or flout the policy.

The issue of whether a transsexual person is entitled to hormone therapy while in prison has been litigated extensively, based on the established constitutional principle that it is a violation of the 8th Amendment prohibition on cruel and unusual punishment for prison officials to exhibit “deliberate indifference” to a prisoner’s “serious medical needs.” Until the last several years, in almost every case, courts have ruled in favor of prison officials.[6] More recently, however, prisoners have had more success.[7]