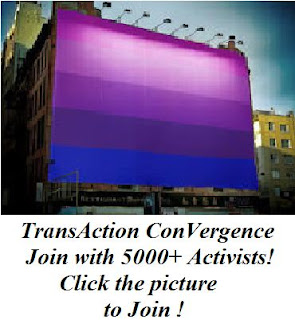 My Baby is going to be killed by Facebook.

This is possibly one of the saddest things I have ever posted about.

TransAction ConVergence, a group that I grew from a small Facebook event is now slated to be deleted by Facebook.

Facebook posted this message offering most groups a option to "Up Grade" to the new group format, keeping their membership by simply clicking the "Up Grade" button. 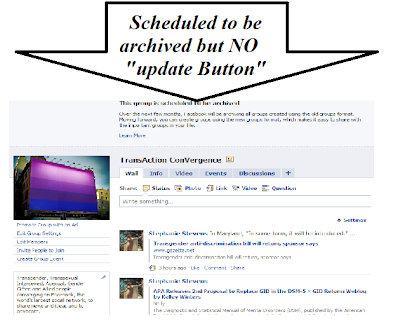 Finding no button I looked for answers in the help section. Facebook says simply to click the button. There I joined with millions of other angry group administrators who were also denied a 'Up Grade' Button. 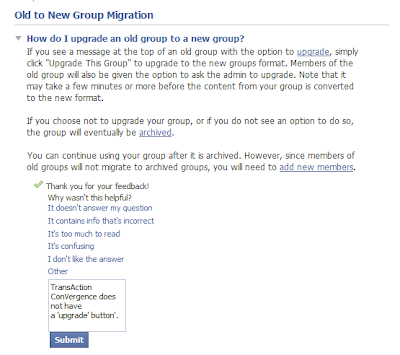 The only reason most of us can see for killing us is we grew too large. We became a 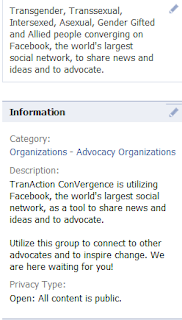 threat to Facebook. That and we are transgender radicals daring to be different. Stephanie kay Stevens and I grew TransAction ConVergence to a 5,000+ powerhouse from a simple event that dared to ask Facebook to add gender Identity/Transgender to the options on one's profile.

Facebook ignored the 20,000 gender variant people who joined that event. It looks like they are hell bent on ignoring millions more now.

Did you ever have a dream? We did and it's TransAction ConVergence. Trans Activists, Journalists and bloggers FREELY exchanging ideas and advocating. The American Dream.

I don't know when this will happen, all I know is my baby is scheduled to be killed by Facebook.
Posted by planet trans at 9:04 AM

very disturbed by this post, why not just start a new group afresh and post the link here inviting current membership here to join? I had to do the same thing with my old GLTBQJA group it was hard work as I had to carry over photos and reup videos (thankfully I had backed them up) and repost some important links, please do consider this suggestion, the advantages with the new group is the real live chat and updates .... gay blogger and friend from Jamaica