Royal Wedding, Censorship and Hate Crimes By the UK Police 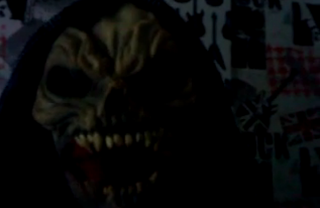 A group of LGBT folks from Britain called the Queer Resistance - UK together with a number of other organizations planned to commemorate the Royal wedding with a ghoulish picnic in Soho.

This celebratory picnic was intended to contrast the money spent on the wedding and the inequity of the proposed spending cuts targeting the poor being considered by Parliament. At first glance this article could be a lighthearted humorous look back at the Royal wedding as narrated by someone named Chris who also shamelessly promoted his book. 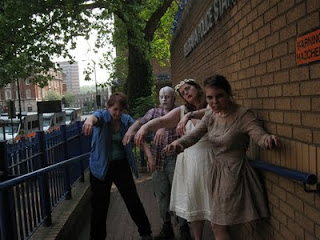 However there is truly a nefarious dark side to this whole affair. Things quickly went bad. Many of the left wing publications that promoted the picnic were shut down one week prior and the organizers arrested without warrants.

The remaining queer picnickers oblivious of officialdom's anger over their audacious plan confronting classism were rounded up just before in a cafe. There smiles quickly turned to looks of worry as the seriousness of the arresting officers set in. 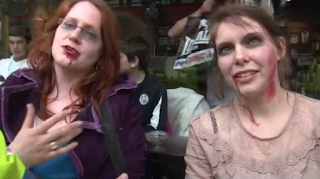 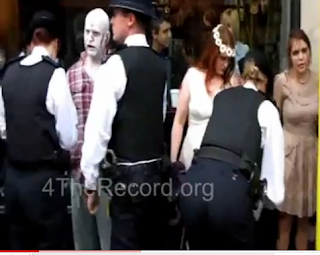 One cannot ignore the implications of these actions.Sure, mainstream media will have no problem ignoring a couple transgender woman groped by police in the name of bourgeois heteronormative marriage but in these times of increasing governmental Internet control and right wing's corporate stranglehold of the Internet the British response paints a worrisome portrait.

During the arrests two of the group who are transgender were intentionally misgendered and illegally searched by the police in a way that can be construed as a hate crime. This attack by the officers was done to send a clear message to a class of people that the British government would assault us in the very worst ways imaginable if we dare to participate with the larger community in confronting it.

Now lets bring this into context. I write a activism column for FROCK which is read in the UK and worldwide. This article in one form or another will appear in the July edition. It's just a matter of circumstances FROCK was not shut down also. If FROCK was published on a different schedule and if I had any inkling of the British governments heavy handed response I would have more than likely written an article about it then.

Do you know of a event in the future that will likely cause such oppressive response against queer folk? Email me at kellibusey@yahoo.com.

For additional links also posted on planetransgender and Transexual Menance.
Posted by planet trans at 10:11 AM