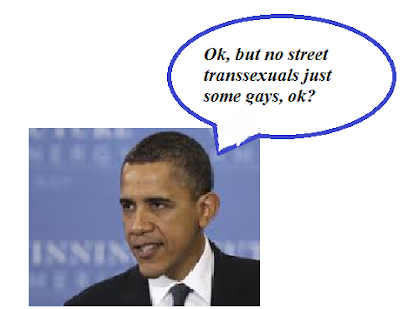 BIG NEWS!! The Obama administration held its first ever meeting with representatives from the transgender community.

OK I don't think so. Everything about the meeting was a secret except that it was scheduled as announced by the gay.com rag Washington Blade.

After all none of us in trans community need the secrecy of a meeting that's required with Arab oil tycoons.

Is the secret that the Obama administration would rather not meet with real transgender people who face the discrimination and that this meeting was with a group of slightly more acceptable privileged white gay people?

Is the secret that these gay organizations will employ shills simultaneously to announce a NEW PLAN for transgender peoples equality. A new plan that by the way fits into gay peoples agenda while simultaneously assimilating the transgender identity?

So Obama, if you want to earn the respect and votes of the transgender community meet with us in public, face to face in a town hall. So, what do you say? *crickets*

So, whats the secret?
Posted by planet trans at 9:22 AM

Email ThisBlogThis!Share to TwitterShare to FacebookShare to Pinterest
Labels: Obama