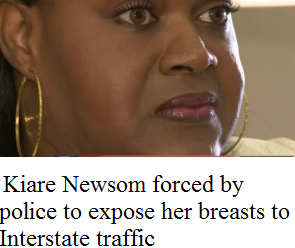 According to Kiare Newsom she was verbally harassed after police learned she is transgender "I've never been called so many names like "Punk, Sissy, expletive deleted" The police then ordered her to lift up her blouse and push aside her bra exposing her breasts to interstate traffic.