Invitation to yet Another Gay misogynist meaT Locker Drag Show! 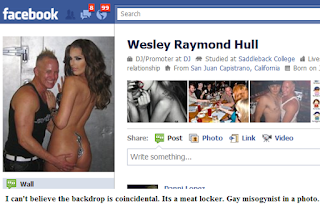 I get a lot of negative feedback when I talk about my dislike of Drag. But sometimes I just got to say...

It degrades, objectifies and stigmatizes the most vulnerable of the LGBT community, usually trans woman but cisgender gay illusionists with little or no choices in life also suffer.

WESLEY RAYMOND HULL had taken it upon himself to invite me to yet another Drag show.

I would like to believe he's just T Totally ignorant of who I am but given my history of confronting Rupaul's Gay.com media mafia, and gay misogynists everywhere but that's a little hard to believe.

Just for the record. Do not invite me to these meat locker shows and I won't fuck with you.
Posted by planet trans at 6:49 PM