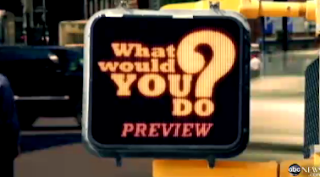 I would call ABC out for transphobia, again.

When does placing a trans person in a contrived over the top situation preying on unsuspecting peoples emotions accurately represent the trials and tribulations we face in the workplace? Since ABC said it does, that's when.

In the latest episode of "lets elicit emotional reactions" ABC's guinea pigs are patrons in a restaurant flipping out over the way a dinner is treating his waitress. Not since ABC's transphobic Work It was Axed have they been able to express their transphobia. Now like Work it they want to frame this awfulness as a learning experience. But ultimately its transgender people who will pay the price.

WE do not need ABC producers to stage a act where we are kicked lower than dirt so unempowered we must rely on a stranger to drag us back up above ground!! And seriously folks, one of these times someone is going to get really pissed off and hurt someone.

Here's the real deal. When I work my part time job as a cashier at Walmart no one gives me a second glance, anymore. Why? Because I don't have anything they want. Its a low paying service job like being a wattress and like a waitress I would never flaunt my gender expression becuse that is not what I am paid to do.

But let me go in there dressed in my primary workplace attire and I get jealous hateful stares because in their minds I represent a threat, having obtained something that's rightfully theirs by using my transgender status as a unfair advantage.

Email ThisBlogThis!Share to TwitterShare to FacebookShare to Pinterest
Labels: ABC Transphobia, ABC What Would You Do?