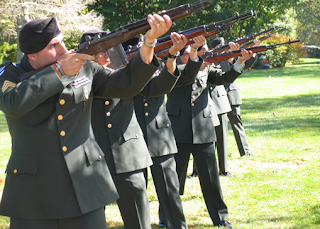 After serving 7 years in the regular Army I became lonesome for the companionship of fellow soldiers and enlisted in the National Guard.

But because I was a Buck Sargent (E-5)I could not get promoted until I changed my job. So much to my surprise I ended up in the Infantry, went to the next Non Commissioned Officer School and was subsequently promoted to Staff Sargent and went on active duty with the Guard. 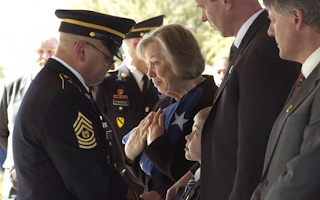 "On behalf of the United States Goverment, the Department of Defense and the United States Army I wish to present this flag in gratitude of your love ones service to our country." This still brings tears to my eyes.

So in the the process I went from being a member,  to leading what we called "firing squads" and presenting the flags to the next of kin.
Yes, a transgender woman  represented the United States Government during the most critical seconds that will formulate how the public thinks of us. Represented. My fellow Soldiers, Sailors and Marines and was so proud during those seconds, our eyes mutually tearful, honestly conveying my respect and love, and condolences.

My respect was honest because even though DADT included me a trans woman my soldiers and superiors  had no issue with who I am. They knew as I showed over and over they could count on me during those critical seconds. They respected me and that meant more than anything.
I always wondered though, how many of those people in the coffins were closeted transsexuals as well, forced to endure a life of internal torture battling their gender incongruous for the love of our country?

To this day that question remains unanswered even after the repeal of DADT, for gay people. But why, you ask, were we left behind? Why?

Outserve answers that question. Because of The New DADT.

Because we remain pathologized by the APA in the DSM. Gay people recognized they had to be removed from thee DSM in order to be removed fron DADT,and its time we did as well. Please take a stand for our transgender people in uniform who are dieing for us even as I type,  and sign the petition to remove transgender from the dsm

I hope on this day of memorial we stop and remember or hero's. Those who lived were granted the rights to their lives authentically, and those like us transgender Soldier, Sailor and Marines

who were not.
Posted by planet trans at 9:15 AM