OuTing The Radfem Agenda: No Peace, Nowhere to Hide

*Update ::The anti trans screed appearing on "gendertrender" was authored by "Gullasmag" and not Cathy Brennan. A honest mistake since the hate from one "Radfem" is often indistinguishable from anothers.  As a example I posted the hatefull pictures that Cathy Brennan sent me in response to this article.
***.
I posted a article on my facebook profile authored by "GallusMag" RadFem 2012 : First Speakers Announced . The article's first few paragraphs appear to be a unattributed cut and past from the Radfem 2012 web page but it quickly descended to a screed easily confused with the recent rants made by another Radfem by the name of Cathy Brennan.

I got various reactions from my friends on my facebook page. Some, cisgender and trans alike, who have had met Brennan expressed there dislike of her tactics. Some uninitiated friends just commented that we should as trans people live and let live. As much as I embrace that philosophy its simply not in our best interest.

Brennan is a chameleon, often posting under various guises always disguising her virulent hatred of gender diversity beginning with her incredible misnamed blog "gendertrander". Brennan's one trademark is to start a conversation by making the other person think she has the best interest at heart, then she will start inserting seemingly innocuous innuendos all degrading and dehumanizing, leading to one point.

Brennan and her ilk believe that transgender people are fake, of no value. They believe all transgender people be they male of females identities, are just facades as all transphobic misogynistic people do. Yes, woman can be misogynists as it is nothing but a expression of hatred and bigotry. Dangerously divisive is there name "radfem' which would lead many to assume the majority of radical feminists have the same beliefs as what you find on the Radfem web page...

OK, so I have established that Brennan and her ilk are transphobic at heart but why shouldn't we just leave them be? I mean they are almost comicaly, endearing in a really creepy sort of way, so why bother? Why elevate Brennan's level of creditability?

This is why. Just when you least expect it they blindside our community with a unprecipitated attacks, like the letter to the UN which was a thinly disguised blitzkrieg  against our gender expression. That is why we can not allow them  peace to formulate there next action without at least making the effort to educate and OUT Brennan and her ilk for what they are!

The truth is Cathey Brennan believes that the expansion of trans rights in public accomidations undermines and threatens the rights of cisgender woman.

Where the hate of the Radfem's vehicle for the transmission of transphobia meets the pavement, a excerpt from their letter to the UN:

We anticipate that GLBT activists will push to enact similar legislation in additional states in upcoming years, including in Maryland and Massachusetts, the states in which the authors of this communication reside. In addition to compromising rational sex-based protections for females, “gender identity” legislation incorporates stereotypical ideas of “what is female” into law. 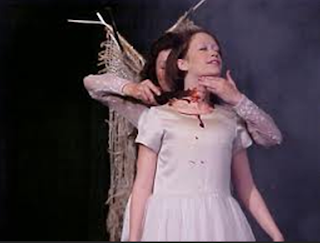 Specifically, the proliferation of legislation designed to protect “gender identity” and “gender expression” undermines legal protections for females vis-à-vis sex segregated spaces, such as female-only clubs, public restrooms, public showers, and other spaces designated as “female only.” Females require sex-segregated facilities for a number of reasons, chief among them the documented frequency of male sexual violence against females and the uniquely female consequence of unwanted impregnation resulting from this relatively common form of violence.[xxi] Public policy, therefore, rationally permits sex segregation in certain settings where a reasonable expectation of privacy exists.

Update 9/21/2012 :: These pictures were sent by Cathey Brennan tweeting as "Bugbrennan" to me in response to this article.... 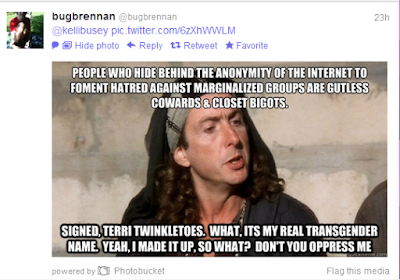 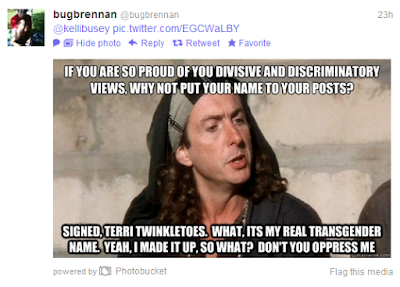 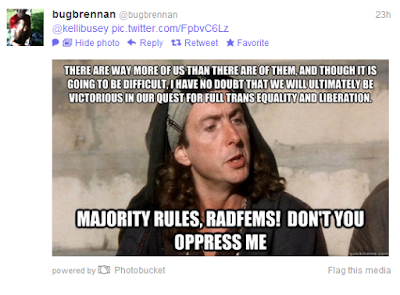 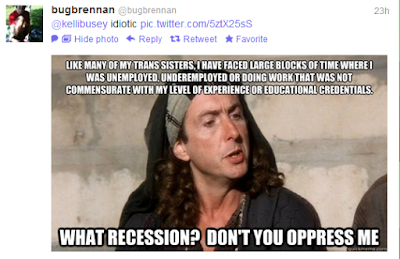 Radfems ET all are simply the worst sort of enemy. They befriend you, gain your confidence and when you least expect it stick the knife in your back. They are chamilions assimilating whatever disguise suits them best at the moment to make the world believe transwoman are in fact nothing more then men. That Trans men are of no value being traitors to there gender.


Hopefully other Radfems attending this gathering in London will become educated and disavow Brennan and excommunicate her like the vast majority of the trans community already has.

On your last sentence, are there any radfems who are not transphobic? I thought that was a defining characteristic. As for women only spaces, given how few transitioned transwomen there are, most women only spaces have only cis women in them, anyway.