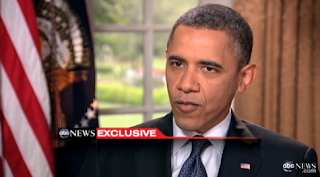 "I have to tell you that over the course of several years as I have talked to friends and family and neighbors when I think about members of my own staff who are in incredibly committed monogamous relationships, same-sex relationships, who are raising kids together, when I think about those soldiers or airmen or marines or sailors who are out there fighting on my behalf and yet feel constrained, even now that Don't Ask Don't Tell is gone, because they are not able to commit themselves in a marriage, at a certain point I’ve just concluded that for me personally it is important for me to go ahead and affirm that I think same sex couples should be able to get married,” Obama told Roberts, in an interview to appear on ABC’s “Good Morning America” Thursday. Excerpts of the interview will air tonight on ABC’s “World News with Diane Sawyer.”


Now what about transgender people Mr President? Can you say T-r-a-n-s-g-e-n-d-e-r? What about ENDA?
Posted by planet trans at 2:20 PM