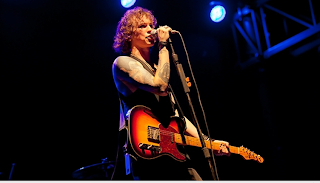 This is the first video to hit the web of Friday's coming out gig for recently out Transgender punker Laura Jane Grace. Her band Against me opened for the Cult in San Diego on Friday and according to the Rolling Stone interview after the show:

Charging through a 40-minute set at Humphreys Concerts by the Bay in San Diego – the first stop in a month-long U.S. tour with British rockers the Cult – the quartet played six new songs, including the rollicking anthem "Transgender Dysphoria Blues," the title track of an album they're working on. Decked out in a loose-fitting black tank top, tight black jeans and black eye shadow, Grace was in high spirits as she delivered her trademark, throat-shredding screams.

"I was worried that some people expected me to come out looking like Little Bo Peep or something," Grace said after the show while hanging out at the merch table with her wife, Heather. (They're doing the tour as a family; their toddler daughter, Evelyn, was sleeping with a nanny in the tour bus.) 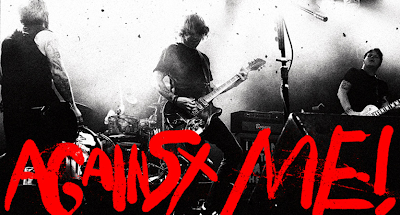