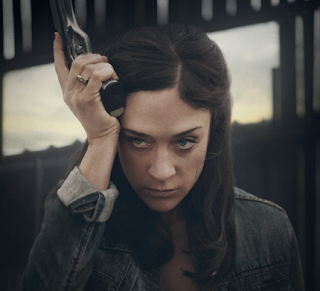 At which episode with this murdering psycho trans hit mom get a contract on her newly discovered family, or will that just remain the come on?

Sevigny, 37, will play the central character of Mia in "Hit and Miss," which is written and produced by Paul Abbott, creator of "Shameless" and "State of Play." Sevigny is best known for her roles in the HBO series "Big Love" and the films "Kids," "Boys Don't Cry" and "Shattered Glass."

"Mia's life is sent into a tailspin when she receives a letter from an ex-girlfriend dying from cancer revealing that Mia fathered a son 11 years ago," a synopsis said.

"Faced with a difficult decision, Mia becomes the guardian to a new family, forcing her to mix her killer instincts with her newly developing maternal instincts. 'Hit and Miss' tells the story of a lethal killer at the heart of a troubled family and how all of their lives will be dramatically changed forever."

Nice clip. A awe gee moment, maybe she really cares and this movie's not just all about making money. Or more that likly its a attempt to put some space between it and UK's banned  Paddy Power's TransToxic "Lady's Day" advert.

Cock. Yeah so some transwoman still have a dick. People at my job are always staring rudely at my crotch as we pass. Not because they care about my happiness. They are staring because I am just a oddity, a it. And they treat me with hateful lies and attacks on my person ruining my chances as promotion and raises, very possibly ending my life.

All because I was stupid enough to believe management had my best interests at heart and asked them to consider changing the medical benefits to include SRS. That was the day everything began to fall apart. That was the day my crotch became public domain.

There's your education Chloë. And its not confusion, shit you make it sound like we are confused over who we are. And "newly developing maternal instincts" sounds like a transwoman is without those feelings normally, get a clue Chloë.

My problem has nothing to do with her selfish pity party over having to wear a dick for the part. She knows that was a promotional spot for millions of potential "Tranny Chasing" viewers.

Its not so much about how there are so many talented transgender actors starving, literally, for work. I'm relieved no trans actresses accepted this role if they were even offered it.

My problem with this concept is that once again transgender and transsexual people will be preyed to feed cisgender people by portraying us as abnormal. I am angry this movie has dehumanizes our wonderful gender gift, lowering it the the most base level. I am upset that the UK media corporations are once again leading the way to transphobia with this murdering chick with a dick. Am I being overly critical actually discouraging new discourse by giving this concept a preemptive thumbs down?

Perhaps, but I wouldn't be critical if media was produced portraying trans people as quirky lovable "friends" or a member of a the "modern family". Just saying.