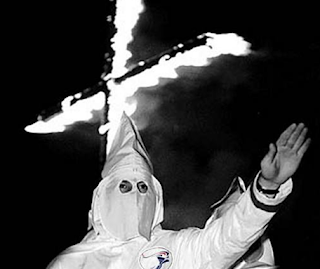 You can dress it up anyway you like, feminist garb, white sheets or with biblical shrouds when its all said and done they have the same central purpose. To exclude to the point of eradication those who they deem unworthy to walk this earth with them.

I do not claim to be a authority on feminism having obtained my degree in homeless transsexual studies with a minor in gay and trans friend couch surfing from real life experiences. But here's my take on it. Radfems are bigots. They claim they are only asking to be left alone for RadFem2012, which they frame as a of "woman born woman living as woman" albeit trans exclusionary gathering. But they are featuring a vehemently anti trans speaker.

The view of seven million students in the UK mirrors her opinion::

"NUS LGBT Campaign is saddened to learn that the RadFem 2012 conference has invited well-known transphobic, anti-sex work and anti-BDSM speakers -- notably Sheila Jeffreys -- to their event. NUS LGBT Campaign is proud to be a feminist campaign. We are inclusive of all genders; we support trans liberation, sex worker’s rights and the right to all consenting sexual practices."

"NUS LGBT Campaign is concerned that RadFem 2012 is explicitly restricting attendance to people they describe as “women born women living as women.” This discriminates directly against trans women in distinguishing them from other women. Many others - sex workers, trans folk of other genders and queers - will also be implicitly excluded by the presence of such hateful transphobic and anti-sex work speakers who do not recognise these identities as real identities, or this work as real work."

NUS LGBT Campaign is clear that gender is a matter of self-definition. The only person who can define their own gender identity is that person, regardless of what biological status they may have been awarded at birth. Trans people, sex workers and queers bring a great depth of understanding of many strands of oppression to feminism - not to mention many brilliant activists. Oppression based on gender identity is a feminist concern; our liberation is a feminist fight.

There is an ugly history of the exclusion of trans women and sex-worker feminists from feminist space and writing, but NUS LGBT Campaign believes that RadFem2012's active transphobia is not reflective of contemporary feminism within the UK. We are heartened by the support of many feminists who agree that there is no place for transphobia in feminism.

Its not just the students who are up in arms over the RadFem2012. The The "F" Word a feminist blog from the UK had this to say (and much more)..... 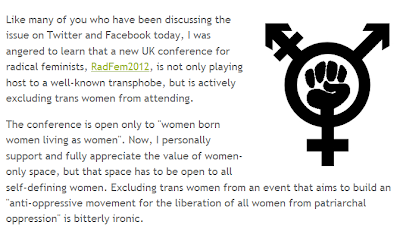 So who is Sheila Jeffreys and why are her views at odds with the vast majority of feminists?

The "F" Word: "Then there's Sheila Jeffreys, who thinks that "transgenderism" is:

Condemnation of Jeffrey's anti trans view was not automatic. The "F" Word interviewed Sheila Jeffreys and conducted extensive conversations about it. You can hear those conversations and the highly charged responses at Facing Our Fear: Transgenderism versus Radical Feminism. The truth is mmainstream Radical Feminists as a whole wwould have rather not have become involved in this divisive topic especially since the people they condemned for there transphobia are admired for their other views and activism.

But they had to confront their fears out of a sense of moral obligation.

So what is the response from RadFem2012 participants to being so condemned by the world of feminism? Cathy Brennan, a out spoken RadFem singled out a transgender woman, a professor, to attack:

Wait! Brennan wasn't done yet! Brennan emailed her employer trying to get her fired! For having a different view on Feminism! That's, SICK! That's classic RadFem. Classic AFA. Classic KKK. That is the unacceptable and why transphobic feminism is discredited by the majority of the worlds feminists, be they cisgender or not!

Catherine Brennan is a partner at Hudson Cook in Baltimore, Maryland. Perhaps people should start contacting her fellow attorneys - and clients of Hudson Cook - and ask why they support a bigot?