#Eurogamer Xbox One Presenter on behalf of Microsoft called Transgender Journalist Laura Kate Dale "IT, Thing and He" on stage 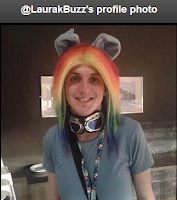 The presenter for Microsoft XBox One at Eurogamer Fraser Millward went out of his way for a laugh asking a transgender woman to join him on the stage then called her a "IT, Thing and Him";

He was probably trying to get a rise from the machismo gamer people in attendance. But instead of getting a laugh comedian Fraser Millward will look forward to being investigated for his awful transphobic tirade..

Pure XBox Gamer Ken Barnes described the stage show as annoying, overbearing, immature, and offputting to most of the attendees but his post about the last day he began with a question Sexism, misogyny, and giveaways?  Barnes said he saw "clearly underage gamers taking part in a "twerking" contest in order to win a t-shirt, in front of a crowd of fans." I wonder if any of those kids parents knew of this? Embarrassing for Microsoft and maybe even costly too.

Fraser Millward would do himself a world of good by apologizing for his comments and actions.

Microsoft has been a pioneer in workplace diversity. It was one of the first companies in the world to offer employee benefits to same-sex domestic partners and to include sexual orientation in its corporate nondiscrimination policy. Since 1989, Microsoft has supported and sponsored gay, lesbian, bisexual, and transgender issues at Microsoft. In 1993, the employee resource group—Gay, Lesbian, Bisexual, and Transgender Employees at Microsoft (GLEAM)—was organized. GLEAM now has more than 700 members.

Hope someone from Microsoft sees this. Your presenter made completely dehumanised me in front of an audience. Ruined my Eurogamer.
— Laura Kate Dale (@LaurakBuzz) September 29, 2013

Hi @laurakbuzz We've just been made aware of this & will look into it straight away. Sorry you had such a bad experience....
— Eurogamer Expo (@Eurogamer_Expo) September 29, 2013

@nipsen Hi there, just to let you know that we are looking into the incident on one of the exhibitor's stands.
— Eurogamer Expo (@Eurogamer_Expo) September 29, 2013

Google and Microsoft have formed InterTech to promote the inclusion of gay, lesbian, bisexual and transgender people in technology field.