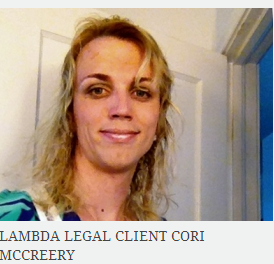 Yesterday Lambda Legal  announced a landmark settlement for Cori McCreery, a transgender woman in South Dakota who was terminated from her job after she informed her employer that she would be taking steps to transition from male to female at work.

Cori McCreery had known and worked for the the owner of this small grocery store for years, building a sense of trust and loyalty. When the owner of Don's told her it was fine with him that she transition on the job she was not surprised even though South Dakota has no state LGBT protections.

But the day she came dressed authentically her world came crashing down.

Cori McCreery explains..."that at Don’s Valley Market, I was a very good employee – in fact, I had just been promoted and given a raise. I had known the owner for years; in fact, I had worked for him for four years at a different grocery store he owned back in 2000 to 2004. So, when he initially told me it was ok for me to come to work as my true self, I trusted that. I had already been living as a woman in every other aspect of life, and to go to work as someone else was not something I could deal with anymore. Working is so important to me, and being at there as myself was something I needed."

"The day is a little foggy from the shock, but I remember being told that I was “making other employees uncomfortable” and “what would moms think?” I didn’t know what to do. I trusted my boss, liked my job, I needed the pay check and I felt like my safety net had just been pulled out from underneath me. That was definitely a day when I knew I needed help." 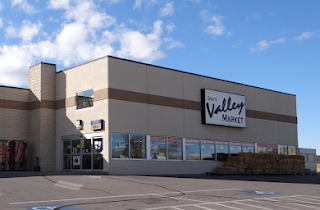 Ms. McCreery having a great network of friend and family was able to quickly recover, finding employment elsewhere. But the its a lesson the owner of Don's Valley Market won't soon forget and employers nationwide should make note of.

If you discriminate against transgender people because of our gender expression you will be held accountable under Title VII. This was not the first trans victory against job discrimination since title VII was amended and it probably won't be the last. It's a tough learning curve for bigots.

"I'm so incredibly thrilled," Cori McCreery told Lambda Legal, who now works for a company which scores 100% on the Human Rights Campaign Corporate Equality Index. "This gives me hope. The day I was fired, I had no idea what I would do. I now feel a sense of closure and can focus on my future. No one should be fired just because of who they are."

McCreery's settlement affirms the EEOC's position on workplace protections for transgender employees and the types of severe penalties employers could face if they attempt to discriminate against their transgender employees. McCreery's employer did not have a workplace non-discrimination policy, which is avoidable and in business owners' best interest to establish policies.

Statement on the EEOC.Gov website Rapid City Market to Pay $50,000 to Settle EEOC Finding of Discrimination Against Transgender Employee